The NY Post just ran an article, Google exec's hooker eyed in second heroin death, about a "high-end prostitute," Alix Tichelman, who may be culpable in the deaths of two different clients from heroin overdoses. As far as her sociopathy goes, I'll just quote one paragraph from the article:

In California, police say surveillance video shows Tichelman casually walking over Hayes as he lay dying on his yacht, picking up her clothes and heroin and swallowing the last of a glass of wine before lowering the boat’s blinds and walking back on the dock to shore.

'Nuff said. (There's plenty of other evidence as to her character if you read the entire article.)

In any case, what I was struck by most was her pictures: 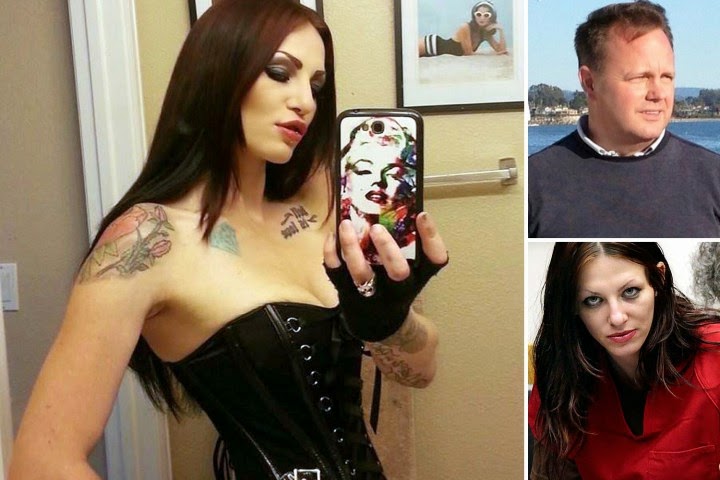 At first I was going to say that she has the blank, expressionless eyes of a sociopath, but that's not quite true. She looks evil in a vampy, trampy sort of way. And it's not just the heavy makeup and the tattoos. She looks completely relaxed and sure of herself, which is how sociopaths often look (and feel). And she somehow manages to look soulless, carnivorous, and salacious as well, all at the same time. 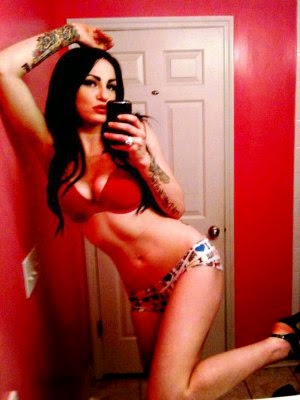 Strangely, the Google exec, Forrest Hayes, looks almost as wholesome as Tichelman looks evil; it's almost as if they included his picture to provide a contrast. (Though if he was hiring hookers and shooting heroin, Hayes' looks may have been deceiving.)

Anyway, some sociopaths, like Lacey Spears, manage to look cherubic. Others, like Tichelman, actually look the part.
Posted by John Craig at 9:40 AM

In the one where she is wearing red, she looks scary. Just as you described.

Do you think the blank, expressionless eyes stereotype could be down to confirmation bias? I'm not saying the stereotype is necessarily wrong (stereotypes do come from somewhere, after all), but I'm sure many non-sociopaths also have vacant expressions that we aren't noticing because we aren't scrutinising them.

Steven --
One of the thought running through my head as I looked at that picture was, who in the world could work up an erection over that? She's far too scary for me.

Gethin --
It's possible that there's some confirmation bias there. But my theory on the "blank, empty eyes" stereotype is that it's a reflection of the fact that sociopaths are so often completely relaxed. Generally, when we're tense, it's because we're around other people and are concerned about making a good impression. And that stems from the fact that we have regard for other people. A sociopath regards others the way you or I would regard a bicycle (note the way Tichelman stepped over the dying Google exec and had that last sip of wine, totally unconcerned about his imminent death). And it's the tension of the face, its "tension," which gives the eyes their expression. When you or I look at a computer, we are generally completely relaxed, too, and so would have that same blank expression. But generally it's just sociopaths who wear that expression around other people.

At places like Chateau Roissy there are occasionally links to pictures of women the readership thinks of as 10s, and most of them look roughly like this hooker. Anyone who protests gets accused of having "pointy elbow syndrome", which I've always thought was missing the point. Considered separately all her attributes are fine, I'm sure. But still she looks harsh, unpleasant. There is no comparison to, say, a young Julia Louis Dreyfus.

(And while we're on the subject, what's up with 10 point scales anyway? Some even use increments of half a point, making it in practice a 20 point scale.)

A --
Couldn't agree with you more about ten's. I wrote about the concept of a ten fairly extensively back on April 29th and May 1st of 2013 ("Dime pieces"). To be a ten a woman has to have some sort of allure beyond just regular features, and at least provide the illusion of a pleasing personality. And if a woman vamps it up like Tichelman, she degrades herself further.

In two of the pictures, I notice she is taking a selfie. Vanity?

I get the feeling she wasn't hired to do the missionary position.

I think something pervy is going on with her.

Allan --
My thought when I saw the selfies was that she probably uses those pictures for business, to advertise herself. (To me, women never look stupider than when they're TRYING to look sexy.)

As far as pervy goes, c'mon, she's a prostitute, I'm sure all sorts of stuff has gone on with her. (And I"m sure she charges extra for it, too.)

Looking at the black corset, I would suspect that she was into S & M. More the S than the M.

More often than not, "high-end prostitute" is just a polite way of saying "over-priced whore".

Anon --
I don't know what she charged, but I'm guessing that rule applies in her case.

Here is a link to an article from Mail Online touching on my thesis:

Here is Ramz Paul's take on it:

Allan --
Yes, she was into perversions, but if you read that Mail Online article carefully, it said she would sometimes wear a leash when she went to nightclubs with her boyfriend, which sounds as if she was more into the M than the S.

Interesting take from RamZ Paul, as always. I hadn't thought about it much from the Google exec's viewpoint, but Paul is right, he must have yearned for something darker in his life. My first reaction upon seeing Tichelman's picture was, yecch, who would want that? But if you want to run that black flag up, as Paul put it, then who better than a witch to do it with? And, I suppose, why not ask her to inject you with heroin while you're t it.

That is actually one aspect of this case that baffles me though: Tichelman was obviously into heroin, yet people who are heroin junkies are supposed to lose their sex drive entirely. I guess she just looked at the prostitution as a way to support her heroin habit (if in fact she was addicted, I don't know).

According to Thomas Sheridan, psychopaths are addicted to risk taking behavior. Whether Tichelman was more into S or more into M, she was one very sick bitch.

Allan --
Agreed. Hope she gets a long sentence.

Im an escort with sociopathic traits but im not a socio fully. I don't feel any empathy for the dude. Hes a lying bastard and a junkie. Escorts are honest compared to a cheating husband. if that happened to me idbe smart enough to call the cops and feign concern, in order to avoid legal action. But i wouldn't actually care abd id keep working business as usual. I also don't look anything like her. I do have a more wholesome look and an hourglass christina Hendricks body.