I'm not sorry to see Franken go, but his "crimes" didn't strike me as being particularly bad. He was widely lambasted for the picture he posed for with a sleeping Leeann Tweeden: 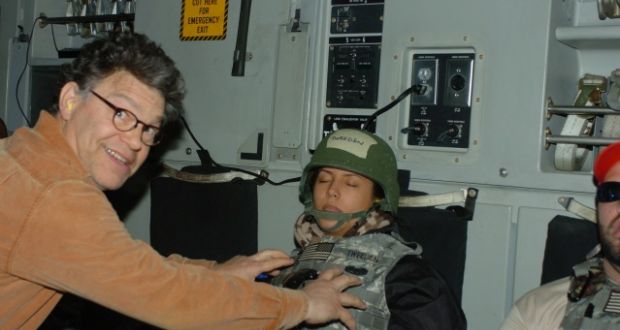 It wasn't particularly funny. And it was the kind of thing you'd expect from a high school student, not a successful comedian. But no matter how lame, it was still a joke.

And that the nation would take it so seriously in this #Metoo moment shows that we have collectively lost our sense of humor.

Though there may be more to it than that. As Steve Sailer pointed out today, even people in his own party can't stand Franken because he's such a jerk.

On TV he comes across as arrogant and self-satisfied. In person, off camera, he's supposed to be worse.

Back in 1999, he wrote a book titled Rush Limbaugh is a Big Fat Idiot: And Other Observations. That pretty much sums up Franken's abrasive personality.

I always sort of hoped someone would write a book titled, Al Franken is an Ugly Obnoxious Dwarf: And Other Observations.

It would have been exactly what he deserved.

He finally got his deserved comeuppance today. Just maybe not for the right reason.
Posted by John Craig at 9:56 PM

He also wrote "Lies and the Lying Liars Who Tell Them" around the year 2003. I bought the book at a re-sale shop for about 50 cents. It's mostly about blasting the Republicans as I recall. People have asked me why I would have that book and I tell them that I am interested in what the other side thinks.
I agree that what he did was not at all bad and I am surprised he resigned over something as innocuous as what he did. I've done worse but of course I am not rich or famous.

Yes, he does come across as an annoying human being. No great loss to politics, I guess.

Europeasant --
I had forgotten about that book. It's good to keep an open mind. Back in the 80's I subscribed to three magazines, the B'nai Brith publication (which was actually pretty benign, and a little boring), a black nationalist publication, "The Black Scholar," (which half the time never even got delivered), and American Renaissance, just to see what they all had to say. It was eye opening.

I appreciate your honesty. I've done worse too.

Birdie --
"Annoying" is the right word.

Blind Gossip just did a SOLVED blinder on this former comedian, titled the Subway Groper. Back in the day when Franken worked on the SNL show, he tried to hit on attractive women who took the subway. The man touched complete strangers inappropriately. Clearly, he has boundary issues.

Birdie --
Wow, a subway masher? I hadn't heard that.

I bet he paid lip service to feminism, too.

karma works in strange ways and caught up with franken. i am convinced the karma gods go after arrogance with a vengeance.

Dave --
And it's always gratifying for us onlookers when they catch up with it.

John,
Al Franken (or "Frog-Face" as my Lovely Texas Bride calls him)always struck me as one of those narcissistic frat boys that I ran into in college. I have never found him very funny and apparently he his not all that smart or he would know not to pull stunts like that after being elected to national office.

Luke --
Couldn't agree more. I grew up around guys like that, they all thought they were geniuses, and they all fell short. They also saw themselves as morally superior, which they also fell short of. And I guess whether you thought he was funny would depend on whether you thought Saturday Night Live was funny; I didn't. When I was young the people I was surrounded by all thought it was hilarious, and I watched it maybe five or six times, always wondering what I was missing, even wondering if there was something wrong with me that I didn't find it funny. (I had that same attitude about modern art when I was young.) Now I realize, it was mostly just lame. (I actually remember seeing exactly one skit I found funny, about Reagan's public vs. private personas.)

Is there a higher level strategy at play here? I agree - the accusations against Franken don't seem bad enough to merit a senator's resignation. Do they plan to use the 'Franken standard' to oust Roy Moore? Or to impeach Trump for whatever improprieties they can accuse him of? Something seems amiss with the Franken story.

Re: SNL - I like some of the Dan Aykroyd /John Belushi material, and will always remember the refined rebuttal argument "Jane, you ignorant slut!...."

Ed --
I've heard the theory that this is all preamble to impeaching Trump, but I'm not sure. I wonder if in some of these cases the guy resigns without too much of a fight because he knows that he's done a lot more that could come out, and resigning that prevent that. That seems to have been the case with Trent Franks. Franked's worst sin I heard was that he had let his hand stray a bit when asked to pose for photos with various women, but Birdie said above that she heard that Franken was a subway groper as well, which is an entirely different level of boundary-crossing.

I also think that some of the resignations are somewhat political in nature, for instance, in Franken's case, he knows he'll be replaced by a Democrat if he resigns now.

I always thought Belushi was overrated myself.....

John - Well apparently Roy Moore lost the election. I believe it was Mark Levin that stated Franken was waiting to resign until after the election for the hope Moore won, then he'd say that if voters elected someone like Moore then he himself should be able to remain in office.

Franken has, over the years, some said pretty idiotic things while in office. I don't keep tally but have read now and then how he places foot in mouth, doesn't understand simple things and believes he is smarter than folks he's trying to demean (interview) but falls short. Yeah, frat boy that never grew up. He does have a Jabba the Hut face but that was a low blow by me, I apologize. Jabba was at least likable and you knew where he stood (or slithered).

Not Dave --
Yeah, just saw that Moore lost. That will make it harder to pass the tax bill.

I saw Franken on Jeopardy once, and he was actually quite good; most celebrities that appear come across pretty stupid, even some of the well known journalists were incredible dumb, but Franken seemed to know a fair number of answers, even though it was the dumbed down celebrity version of the game. But yeah, his overall smugness and smarminess are unmistakeable.

Dragging his feet. A replacement has been named so there's going to be a "transition" though no one knows when that will happen. He's still voting and attending meetings, etc, still acting as a Congressman. Like all the other celebs/politicians the accusations haven't gone past just that, accusations. Apparently that's all it takes nowadays.

I'm sure Franken is a smart dude. Like everyone we say dumb things now and then. Most of us aren't in committee hearings on Capitol Hill when we say them so they don't get memorialized in print or video. I don't trust politicians in general no matter what side they stand on. I'm not a big follower of politicians either but he's one I've never liked or trusted. Just always seemed sleazy.

Not Dave --
Ugh, I hope he doesn't change his mind. And if he does, I hope more women come forward. Birdie mentioned above that he was known to be a subway masher too, which is worse than letting his hand slip while posing for a photo with some woman who asked to have her picture taken with him.

Franken never struck me as sleazy (in the sense of being corrupt) so much as just smugly self-satisfied.