"This 'decorated Green Beret' is a total fraud"

I've mentioned previously that one red flag for sociopathy is to claim to have been in military Special Operations, or to have worked for the CIA, when one has not. The NY Post ran an article yesterday about Papotia Reginald Wright, who dined out on his "service" as a Green Beret for years. 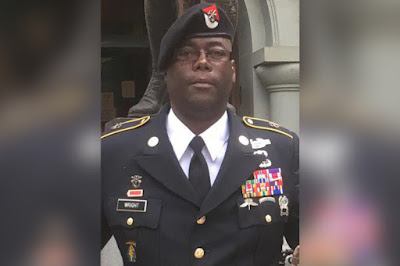 Wright illustrates a lot of different facets of sociopathy.  (Excerpts from the article are in italics, with my comments in parentheses.)

Brooklyn Army vet Papotia Reginald Wright's resume was impressive by any standard. He boasted of a Purple Heart, Bronze Star -- and a slew of other medals as an elite Green Beret that got him into swanky galas and even field access to the Giants.

But Wright is nothing but an accomplished fraud, it was revealed Thursday.

He never served with Special Forces, never served in any combat role -- and never rose above the rank of "specialist," according to military documents obtained through FOIA by Guardians of the Green Beret.

Wright even lied about how long he was in the Army, claiming he served 25 years when he was really only enlisted from 1982 to 1990, the documents show.


He spent most of his time as a driver, with stints far from any battlefield in Alaska, Egypt, Georgia and Texas, according to his papers.

While living his lie, Wright became a prominent figure in the local military community. He even started an organization to help vets in Brooklyn last year, calling it the 8th Special Forces Regiment New York Honor Guard.

In his bio on the group’s website, which has since been taken down, he wrote:

“In August of 1982, [Command Sergeant Major] Wright was ordered to Fort Bragg, N.C., where he became a member of the U.S. Military Special Operations Command for over 25 years.

“CSM Wright circumnavigated the world while performing his duties when it pertained to defending America and her citizens for his actions.”

(That sentence doesn't even make sense. And note the grandiloquent phrase "circumnavigated the globe," as if Wright were another Vasco da Gama.)

He even tried to look the part.

Photos show Wright — who was arrested in 2015 in South Carolina for obtaining property by false pretense — at the Giants game and other events in his phony Green Berets uniform, complete with a Special Forces patch and Purple Heart medal.


Under the Stolen Valor Act, it’s a federal crime to lie about military heroics for monetary or other tangible benefits.

Representatives for the Guardians of the Green Beret, which is made up of current and former Special Forces, said they began investigating Wright after receiving tips through the website.

“It bothers us. Stolen valor is an epidemic. We cannot keep up with the cases sent to us,” one member of the group said.

(There's no shortage of sociopaths.)

(Most people would be ashamed to masquerade as something they are not; but sociopaths simply don't feel shame.)

Jeff Johnson, 37, who served over 11 years in the Army, worked at Wright’s organization in November and said he felt duped.

“It wasn’t confirmed to me until three or four days ago when I got a call from one of the members of the unit who was heartbroken,” he told The Post.

“For a while I just started chuckling. It was like this uncomfortable chuckle. That’s when I realized I was played for a friggin’ fool.”

(Sociopaths always leave people feeling foolish after they realize they fell for his tricks.)

Johnson said Wright told wild stories about his Army days, once recalling how someone ran up behind him, cut him open and removed his kidney.

“He said he was living off half a kidney,” the aspiring actor said. “He’s an amazing storyteller because he will get into details.”

He started to appear before football games and all that and the flags and all that,” he told The Post. “He sort of blew my mind a little bit when I found out that bugle he was blowing was a recording.”

(The more you learn about a sociopath, the more fakeness you uncover.)

He said Wright hasn’t paid his rent at the Armory building in Park Slope, where the group’s offices are located...

Wright’s group has stopped posting on Facebook since he was exposed.

The funniest thing to come out about Wright's scam was an error he made regarding his uniform:

He wore a black beret. If you're going to pretend to be a Green Beret, you should at least get that part of your outfit correct.

There is a blog called Stolen Valor, where they keep track of these things, including investigating and exposing military frauds.

LBD --
I just spent 20 minutes reading through that site's various reports of frauds. I had always imagined that most of these fake SEALs etc. were mostly doing it to impress people they met, and to be able to wow people with their toughness. I was surprised (though I shouldn't have been, now that I think about it) to find out how many of them were doing it for financial game, to take advantage of federal programs benefitting wounded veterans, etc. And a surprising percentage them WERE actually servicemen, they were just exaggerating their service. (You'd think they'd just be proud of the fact that they'd been in the military.)

I've heard, from someone who's actually a combat veteran, that even guys who've seen combat will often embroider just a bit on their stories.

In my experience, most veterans minimize rather than embroider their exploits. My husband was in the Israeli army (combat infantry) during the six day war and the Yom Kippur war, and rarely tells any war stories. When he does, they are usually amusing anecdotes about the vicissitudes of army training and daily life, which are universal in any military organization. My stepson served in an elite combat unit, and to talk to him you would never guess it. Part of that is that soldiers in those type of units are enjoined from gabbing about operational details, and they take that very seriously. Loose lips sink ships and all that.

My father fought in WWII (the big one) and it was nearly impossible to get him to share his experiences.

LBD --
Then your husband and stepson are admirably modest, and discreet. And yes, the elite units are all sworn to secrecy. The Greatest Generation guys were generally modest, too.

Both of my grandfathers served in Europe in WWII, one a motor pool mechanic and the other a B-24 pilot (Captain). I never heard either of them speak of anything about WWII. My mother says her dad (the pilot) only spoke about those experiences with his Army Air Corps buddies.

My brother and grandpa were watching a show on TV about the Kassel bombing mission that failed horribly. My grandpa's response was, "I lost a lot of friends that day." He never said anything else. I know he was on a bombing mission the day before but was grounded the day of the Kassel mission. I know he saw a lot of buddies leave and only a few, literally just a few, return. Things like that take a toll on a psyche. It's war.

I have a friend that's former Special Forces (Green Beret) and he has never spoken about missions he's been on. I don't ask. Another friend was in Beirut when the barracks got bombed. He's spoken a little about it, just once though. Both of my friends have normal lives, they don't embellish anything, don't claim to be more than they were. That's the majority.

These folks that "steal valor" have inferiority complexes. I've met one. He claimed to be in the Vietnam War, claimed to be a Vietnam vet. When tasked by a coworker that was actually on a firebase in Vietnam during the war it was found the guys unit made it to Germany but never went to Vietnam. He disappeared and we didn't see him again. It was during a funeral service for the guys father and he was introducing himself to everyone as the son and as a Vietnam vet. I'm sure he kept doing it after the funeral service because it was so much of who he was, been lying to so many for so long. Had my friend who was a 1st Sgt in artillery that knew I would've never known.

Dave --
I suppose these lies work better with people who were never in the service -- like me -- and who wouldn't know what questions to ask to see if someone is lying. If someone told me he was Special Forces or something like that, I'd pretty much have to take him at his word, though based on everything he said I might have my suspicions.

I"m sure you're right about the majority.