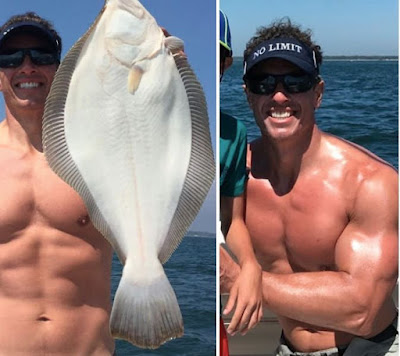 Chris may be neither as smart nor as sly as his Machiavellian brother, Governor Andrew, which is why being called Fredo struck such a nerve. But with those store-bought muscles, at least he's stronger.
Posted by John Craig at 7:27 PM

Hi John,
The second picture sort of looks like there is the beginning of a gap between the upper front two teeth. The guy is obviously not in the same class as Schwarzenegger but with the tooth gap and squared-up jaw he could be doing HGH as well as testosterone. It is a pretty common combination.

Luke --
interesting, thanks. I hadn't realized that was one of the side effects of Hgh.

I should go on that stuff. In the past five months I've taken my trap bar deadlift from around 175 to 255 *(you'll laugh at those numbers, I realize), and I haven't gained a single pound. (I'm 65.) There's no point in getting stronger if you don't look stronger.

I find it funny that Chris thought the Covington Kid was at fault for having a momentary "smirk" on his face while having a drum banged in his face. If you compare both of their reactions to being confronted, you see just how in control the 16 year old was versus Chris.

I wonder how Chris would have responded had the man banged a drum in his face - would his response just have been a "smirk".

GT --
Great point. I basically never watch Cuomo, so was unaware that he'd been so critical of the Covington kid; the hypocrisy of the Left is nonstop.

I understand that they're all pretty much silent on the issue of Antifa's behavior, merely occasionally referring to them mildly as counterprotesters." And those guys are a lot worse than Cuomo.

Agree - How can the media victim blame the Covington kids while endorsing or staying silent on Antifa?

During his “closing argument” segment, Cuomo accused the group of teenagers of being “unduly provocative” and questioned the whereabouts of the chaperones and why they were wearing MAGA hats. He then singled out Nick Sandmann, who he said made a choice to get into a “standoff” with Phillips.


As for Antifa - I have struggled with the Antifa group as I do not understand how they function within the law- if a group gets a permit to protest /march and the Antifa group shows up to "counter protest" with peeper spray, clubs and "milk shakes" how is that legal?

GT --
The media seems to do it the way they always do it, by only reporting stuff that fits their narrative. To characterize the Covington kids as "unduly provocative" is completely disingenuous: they were completely passive in that situation, first the "black Israelites" started yelling names at them, calling them faggots and the like; second, Nathan Phillips approached them, they didn't approach him, and he was banging a drum the whole time. As far as wearing MAGA hats being called provocative, I don't recall any conservatives ever seeing, say, an Obama t-shirt and using that as an excuse to act aggressively.

What happens with a lot of these Antifa counter protests" is that the local Mayor instructs the local police to give them wide leeway, or to stand down, or somesuch, since most of these Mayors are Democrats and so favor the Left. Sometimes they're relatively responsible and try to keep the two groups apart. But sometimes they're not, as in Charlottesville, where my understanding is that the Mayor tried to provoke a confrontation by essentially herding the two groups together.

Exactly, Antifa is a terrorist organization. I have my theory about the participants. Here in Charlottesville, our local leaders were instructed to stand down. They wanted a confrontation between the groups. Unfortunately, the media stirs the pot, dispensing their false narrative of the events. It seems that the current batch of Democrats are Saul Alinsky followers, using the Communist playbook line-by-line. I wouldn't be surprised if Soros was/is involved in a lot of events that have taken place. Regarding Cuomo, he is a clown. He referred to himself as an actor who works for CNN (Communist News Network), so that's how I view him. Interestingly, he didn't describe his occupation as a journalist, a newscaster, etc. He lies for a living.

Conservative Woman --
You're absolutely right, the Left is currently following the Alinsky playbook to the letter, whether that's by design or just because their instincts are to act that way.

I"m surprised Cuomo was actually honest enough to describe himself that way. Maybe he was just being philosophical, as in the Shakespearean "All the world's a stage" sense. Or, maybe he was making confession of sorts.

No woman wants to be replaced by her understudy.

Pangur --
At first I thought, well, his comment was written on a Saturday evening at 9:14, has the normally cogent Pangur had a few drinks? Then I realized that this was a simple clerical error, you meant to write that comment after the next post, "Hillary's feelings about Elizabeth Warren."