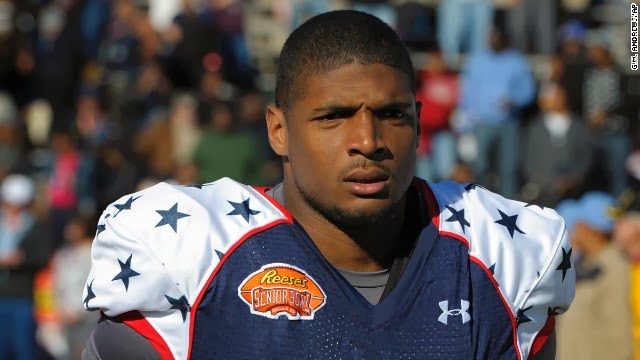 NFL prospect Michael Sam has gotten so much predictably positive publicity, so much sympathy, and so much goodwill from his coming out that it makes me wonder why some straight NFL player didn't pretend to be gay and "come out" just to reap the benefits.

Given the media's longstanding, and until recently unrequited, hunger for a gay NFL star, it's been obvious that the first openly gay player to come out was going to be anointed a national hero. (Medal of Honor winners could only hope to get a tenth this much public adulation.)

As the first gay pro football player, you might even get endorsements you wouldn't otherwise get.

All you'd have to do is stay in the closet. It wouldn't be that hard. Every time a gay guy came on to you, you could just say, sorry, I'm in a relationship right now. And every time you wanted to get laid, all you'd have to is either swear the girl to secrecy (if you trusted her) or tell her that you're HIV-free and want to "experiment."

It'd be sort of like the life of a Hollywood actor, but in reverse.

Had I been an NFL player, I would have seriously considered doing this.
Posted by John Craig at 11:16 AM

This player came out to his teammates a while ago, so the NFL general managers would have known about his sexual preference even he did not come out to the world.

But I think many teams will hesitate to draft him, as many do not want the adde commotion surrounding this player. I suppose we will find out soon enough.

Not sure about firms using a fifth round draft pick as a sponsor, unless he become a dominant player. Depends on his personality, but it seems like only NFL quarterbacks get endorsement deals.

Anon --
I'm sure you're right about the GM's knowing about him. But even though he'd cause some commotion, my sense is he's not a disruptive guy who's going to alienate his teammates, so it's not going to be the kind of commotion which is going to cause dissension within the team. I'd liken the situation to the Jets taking Tebow; Tebow was famous for his religiosity/virginity/bended knee pose as much as his passing ability, yet the Jets figured he'd put more fans in the seats, and he may have, at least at the beginning of the season. Sam is going to get enough publicity that whatever team he ends up on will get more publicity, and I don't think it will be bad publicity.

I doubt he'll get a huge endorsement deal from a major sponsor, but I bet he gets something, maybe some sort of off-beat type of endorsement from some company which wants to appear "hip," just because he'll be famous. He's also good-looking, which doesn't hurt. Plus I'm guessing he's fairly personable; most of the gay black guys I've known -- or known of -- have come across more intelligent, or at least more civilized, than the average strutting, cocky, full-of-bombast black pro football player.