An A for ambition 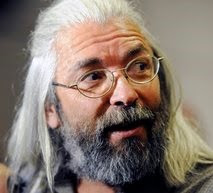 You've probably heard of Gary Faulkner, 50, the unemployed construction worker from Colorado who had traveled to Pakistan with a pistol, a 40 inch sword, and night vision equipment on a mission to kill or capture Osama bin Laden. The forty inch sword was for beheading bin Laden if need be. (Gotta love a guy who never outgrows his boyhood dreams of adventure.) The Pakistan government released Faulkner after determining he had broken no laws while over there, so he is back home in Colorado today.

Scott Faulkner said about his brother last week, "Is it out of the norm? Yes, it is. But is it crazy? No. If he wore a uniform and called himself special ops, would he be crazy?"

Well, no, not if he actually were in an Army Special Operations unit. But he's not.

Most of the news accounts of Gary Faulkner have had an understandably mocking undertone. Faulkner, to my knowledge, doesn't speak Urdu, has no contacts in Pakistan, and can only be away from his kidney dialysis treatment for limited periods of time.

Faulkner said, "This is not about me. What this is about is the American people and the world." This, of course, was a sure sign that this was in fact about Faulkner: nobody ever denies something they haven't been accused of unless it's true.

Had Faulkner succeeded in what his relatives called a Rambo-style mission, he would have embarrassed the entire US government, the US military, the CIA, and the last two Presidents, who have been unable to locate and capture Osama bin Laden.

This was not Faulkner's intent, of course. His intent was merely to become a hero. And what a hero he would have been. Imagine if this unemployed construction worker had personally killed Osama bin Laden and lived to tell about it.

Sweetest of all, the President would have had to swallow his pride and invite him to the White House to congratulate and thank him.

Maybe Faulkner was being unrealistic about his chances of actually killing bin Laden. But you can't fault the guy for not dreaming big.

Addendum, same day: the NY Post just came out with an article saying that Faulkner intends to return to Pakistan and finish his mission. This sounds crazier than ever, now that his photograph has been widely released. (What are the odds that bin Laden's deputies would not kill him on sight now?) On the other hand, the article also mentioned that Faulkner has just signed with a PR firm.

So maybe he's crazy like a fox as well.
Posted by John Craig at 9:27 AM

Faulkner is crazy. OBL is at a pub near Heathrow watching the world cup.
G

John, This guy is only 50??? (Maybe it's an unflattering photo.) Did he bring the gun and sword over with him somehow, or did he procure them over there? Julie

It does seem to be turning out that the fatwa we've issued on OBL is about as effective as the one the Ayatollah put out on Salman Rushdie.

I just hope OBL isn't enjoying himself as much as Rushdie seems to be. In my son's words, "No one that ugly [Rushdie] should be getting women that good-looking."

Julie --
Don't know about the gun and sword. As far as his looks, I have to imagine that beard and hair aren't doing much for him. Plus a nonfunctioning kidney is not exactly the fountain of youth.