A woman with a man's disease 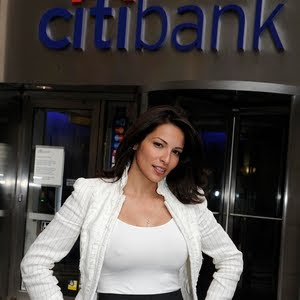 Debrahlee Lorenzana has been enjoying her fifteen minutes after having claimed that she was fired from Citibank for being too "hot." Evidently her managers told her that she shouldn't wear certain clothes because it was too distracting to her male coworkers. According to Debrahlee -- could her parents have possibly come up with a trashier name? -- her managers told her that other similarly attired females were not as distracting because of their general unattractiveness, but that she presented a problem when she wore form-fitting clothing.

Personally, I could have concentrated on my work just fine around her. But tastes vary; some guys like women who resemble cows.

Debrahlee, from the way she comports herself, seems to feel that tastes don't vary, and that every guy must drool at the sight of her.

Every now and then, however, you come across a woman who, perhaps with the encouragement of a couple of Citibank managers with poor taste (as well as judgment), thinks herself hotter than she is.

Let's hope Playboy, which semi-specializes in women who've been embroiled in various controversies, doesn't give her a contract.

Addendum, 6/9/10: Turns out her twins weren't even real. Just one more bit of evidence that women with implants and men on steroids are much more exhibitionistic than those who are naturally buxom or muscular.
Posted by John Craig at 9:48 PM

John, This reminds me of an experience I had at work years ago from the other end of the spectrum. There was a secretary in the legal dept. in which I worked (at a large corporation) who started wearing sweatpants to work when she became pregnant with her third child. While the men to whom she reported were horrified, they were both afraid to confront a woman -- especially a pregnant woman -- about the way she dressed. And these were two lawyers! So she got away with it, and it bothered me, because I know she knew she was pushing their buttons. (She was a woman who resented working, but had recently remarried and knew that she would be "retiring" after this child was born.)

I think this story demonstrates that, typically, unless a woman's dress is really extreme, other employees will not complain to H.R. I would imagine that Deborahlee did not dress as demurely as she believes she did. And while I hate to say it, what is demure on one person can be less than demure on another. It's not so much a question of attractiveness, but fit -- I see it with my teenage daughter and her friends -- a low-cut top on one girl can look much different, and provoke different reactions, than the same low-cut top on another. That's just the way it is, and there is nothing sexist about it. Julie

Julie --
Thanks for your comment. You're right, we live in a very pc world where most people are very scared of saying anything that could later be used in a discrimination suit against them.

As far as this woman's dress goes, she's obviously a bimbo and the type to flaunt her assets, but the problem is, you can't have different standards for different people, at least not from a legal standpoint. So if she was asked not to wear the same clothes others were wearing, she actually has a point. On the other hand, that wasn't the reason she was fired: she was fired for not bringing an customers in at her new branch office. And as soon as she was fired from there she decided to complain about what had happened at the previous branch, which is a little lame. Still, my guess is that she probably has enough so that Citi will settle out of court and she'll get a minor payday. She doesn't really deserve one, but that's the way the world works these days.