Go down kicking and screaming 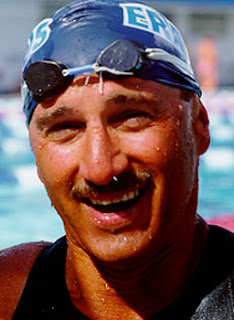 I saw an old swimming buddy, Bob Kolonkowski, at a masters meet this past weekend. Bob is 62, but looks 42. And he still enjoys surfing. In fact he's been surfing so much recently that it hasn't left him much time to train for swimming. As a result, he's not swimming particularly well, but that doesn't seem to bother him, and he comes to the meets anyway.

He wears his hair in what looks like a modified shag -- or even mullet, I'm not sure -- but that's okay: his activities are the same as they were twenty-five years ago, too.

I told him, "You know, there's a rule in masters swimming that if you look twenty years younger than you are, but are only swimming ten years younger, you get DQ-ed from your events."

He smiled and explained how his hobby had left little time for swimming, said he was going to go surfing later that day, and told me about the recent Costa Rican surfing vacation he had taken with his son. He radiated enthusiasm as he talked about the waves off Costa Rica. He then invited me out to his house, which is evidently within walking distance of the beach on Long Island. "I have seven surfboards in my garage," he said by way of enticement. (At this point I had to confess that I wasn't a surfer.)

Sixty-two years old, yet he still surfs at every opportunity -- because he's still a teenager at heart. I guess he never saw any percentage in getting old.

It's hard to argue with him on that score.

I hope he has another thirty years of riding the waves ahead of him.
Posted by John Craig at 7:05 AM