It's Nobel Prize week in Stockholm. Each of the distinguished recipients will give a lecture on his field, and the media will duly take note, although the attention of the world will be focused mostly elsewhere.

Far more people tune in to various sports events, or to the Grammies, than to the Nobel ceremonies.

So maybe it's time to spice those dry speeches up a bit, to stir up more interest in the hard sciences like chemistry and physics. To turn the Nobel Prizes into something the public actually wants to see. Like the Super Bowl.

The 2016 Nobel Prize in Physics is being split between David J. Thouless, F. Duncan M. Haldane, and J. Michael Kosterlitz. Each will undoubtedly bore their audience silly with some soporific speech which will hardly inspire the average teenager to take up physics.

Why not borrow pages from the worlds of sports, and hip hop? Athletes understand that a little trash talking increases the gate. Why are the Nobel laureates too dumb to realize this? 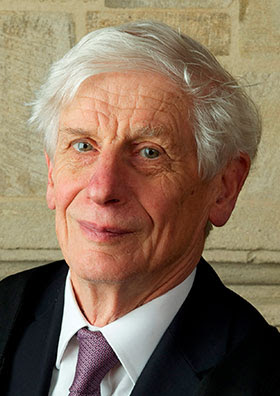 Imagine if Mr. Thouless -- a condensed matter physicist from the UK -- were to channel, say, heavyweight champion Deontay Wilder. He could get up on stage and say the following:

"Man, this feels great. I'm just real excited, you know? It just feels great to have a real Englishman, you know, bring the Prize back to the UK, where it belongs. Britannia rules! You notice these other two dudes, Haldane and Kosterlitz, they only got a quarter of the prize each, while I got a half. I wanna give a shout out to the Nobel committee for recognizing me, but for real, I shoulda got the whole thing. I don't want to be a poor sport or nothing, but the fact is, I am the true champ -- the greatest physicist of all time! But really, I'm just all about having fun, I like to have fun with physics, man, otherwise it's not worth it. Anyway, I just wanna thank the Lord, I know He was behind me on this one, and I'm blessed to have won this award."

Then, as Thouless leaves the stage, he could do a cute little hip-gyrating shuffle.

Here's a scientific equation most of these physicists seem too stupid to grasp: Gracious + Inhibited = Boring.

The more these guys understand that G + I = B, the more students will understand E = MC squared. 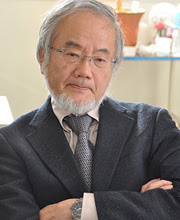 Or how about Yoshinori Ohsumi, who won the Nobel Prize for Medicine this year, for his discoveries of mechanisms for autophagy? He should follow Kanye West's lead:

"Hey, I appreciate this award and all, but let's be honest -- I am the number one human being in medicine. That means that any person living or breathing is number two....Medicine is the new rock and roll. We are the rock stars, and I'm the biggest of all of them....Come on, how could you be me and want to be someone else?....I'm like a vessel and God has chosen me to be the voice and the connector...My greatest pain in life is that I will never be able to see myself think."

Then, as he walks off the stage with a raised fist, "Banzai!"

If you want to proclaim your own greatness, there's no point in being inhibited about it.

These guys should also show a little more camaraderie, maybe with some youthful hijinks to dispel some of the dullness. A couple of those scientists should arrange to pour a bucket of Gatorade onto the winning scientist's head.

Hey, it's all about making science sexy!

Shake up those bottles of Dom, spray the fizz, and turn Stockholm into a party town!
Posted by John Craig at 11:03 PM

They're not all boring. Richard Feynman goofed around at his ceremony. I'm pretty sure I saw a picture of him pulling faces at the official dinner for the prize winners.

Gethin --
I'm sure you're right. This wasn't exactly a serious post, all I wanted to do was highlight the yawning cultural/personality gap between these types and popular culture types. (I admit, I picked two extreme examples of "popular culture.")

Autophagy discovery is good, it may explain where all the alzheimers comes from. You thinking of living longer? It may stop the negative side effects of aging if they crack it. Not immortality, but imagine living to 110 and being in shape.

Josh --
That would be awesome.

I wasn't trying to disparage any of this. This post was intended purely humorously, though no one seems to find the concept of those guys talking like that funny except me.

That also reminds me, Kanye West went a bit nuts, maybe he has problems with autophagy ironically or he may be just fine and gis rant on the cabal is true or both or maybe none of the above. I dunno. What happens if he had his autophagy fixed would he still be like himself? He seems kinda bipolar.

How does bipolar fit into autophagy, i gotta google that.

Josh --
You know far more about this stuff than I do, I'll defer to you. (I'd never even heard of autophagy until I wrote this post.)

I heard one version that West was faking his "breakdown" in order to be able to recoup his losses -- via insurance, I guess -- on his concert tour. He strikes me less as bipolar and more as just a narcissistic personality with zero inhibitions. His narcissism is so extreme as to make him look nuts; but I'm not sure it's anything else.

He is a weenie, but what about what he said?

Josh --
About sacrificing his mother to the Illuminati for fortune and fame? (I just looked that up.) Good point, that does sound insane. I don't know, maybe he is. He has the classic narcissistic delusions of grandeur, and those are supposed to go hand in hand with paranoia. But the bit about his mother definitely takes it a step further.

Birdie --
I suppose, just for the experience, though I suspect it would be pretty boring.