While researching James Burke, the Suffolk Police Chief who's now serving time for assault and may or may not be connected to the Gilgo Beach serial killings, I stumbled across this article, which contains an embedded video of the recent press conference in which the paid escort "Leanne" described her experiences with Burke at a sex party near Gilgo Beach.

She said he tried to have sex with her in a bathroom, but was unable to perform. He then roughly grabbed her by the hair and forced her to service him orally, but he wasn't able to perform that way, too. He then told her that she was "not a good whore," and tossed some money at her, as if angry.

Most guys, when impotent, are embarrassed, maybe even mortified. And they are apologetic to the woman. A sociopath reacts differently: he gets angry. Since, in his mind, nothing is ever his fault, he blames the woman. And maybe even gets violent afterward.

It would never even occur to most guys to react that way.

Yesterday, the NY Post ran an article about a Florida murderer. The relevant excerpts:

A Florida man told police he murdered his girlfriend’s cousin and then had sex with her body just for the thrill of the gruesome deed.

Christopher Shows, 21, was arrested Monday for the grisly Dec. 7 killing of Amanda Suarez, a 21-year-old mother of four — who was attacked inside her Okeechobee home.

Here's a picture of Amanda Suarez and Christopher Shows: 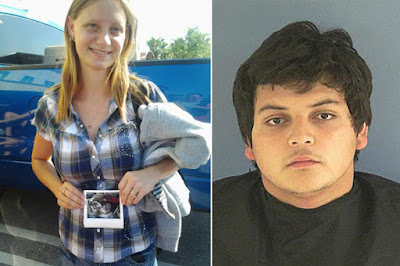 Every now and then you hear of a murderer who kills just to see what it's like. Whenever the public hears this, they assume that there must have been some deeper, stronger, underlying motive. Perhaps Shows hated Suarez for some other, hidden reason.

But, it's actually not that way. Sociopaths will kill just out of a mild curiosity. That's how utterly without compunction they are.

Again, most people would never dream of doing something like that.

That's exactly what allows most sociopaths to hide in plain sight.

How many of the police who used to work for James Burke suspected him of being the Gilgo Beach serial killer? (I emphasize, there's no hard evidence connecting Burke to the killings yet, but he does seem to be a suspect.) My guess is, few of the rank and file, even if they knew he was a difficult personality, actually suspected him.

How many of Christopher Shows' high school buddies would have thought that in a couple years he would shoot and kill a woman just to see what it felt like, then have sex with her dead body?

My guess is, none.

Most people can't imagine that the guy who seems so trustworthy and earnest is actually embezzling company funds. Or trying to poison their relationships with their friends. Or trying to lure them into self-destructive acts. Or, killing people on the side.

I can't tell you how many times I've heard people make excuses for a sociopath along the lines of, "Oh, he'd never do that."

Or, "Well, he may have a dark side, I mean, we all do, but he's certainly not capable of that."

Or, "He's a really honorable, honest guy. I know he is." (Because the sociopath told him he was.)

Sociopaths bank on others' naivete, and lack of imagination.
Posted by John Craig at 6:13 PM

"Or, "He's a really honorable, honest guy. I know he is." (Because the sociopath told him he was.)"

A criminal defence lawyer told me that his sociopath ex-clients bragged to him about how intelligent they were, even though none actually were bright. Bragging about alleged virtue and/or intelligence are sociopath red flags, IMO, as is endlessly playing the victim without providing evidence of the alleged oppression.

I have a request for you: could you please write a blog post detailing the red flags for spotting sociopaths, if it's something you'd be interested in doing? I've searched online and found some helpful 'top ten signs' lists but they all seem to be geared for potential romantic partners rather than for potential business associates or acquaintances (I initially typed "friends" but I don't think it's possible for a sociopath to have any). You seem to know a lot more than most people on this topic so your insight would be valuable. No pressure though :-)

Gethin --
I actually don't find boasting -- directly or indirectly -- about one's intelligence to be a sign of sociopathy; too many nonsociopaths do it. The greater correlation there is with stupidity. Most, but not all, of the people who've told me they're smart are actually dumb, and the corollary is actually true too: most of the people I've known who berated themselves for their own stupidity were actually pretty smart.

Okay, that's a good idea; I'll put it on my list of posts to write. No promises as to the timing though.

(I also don't want to give the impression I'll write on command, though, as I rarely take suggestions for posts.)

ryan zinke sociopath or not ? i think he is. in his photos he also has this weird contemptuous look on his face all the time, which is a great sign of it. another sociopath navy seal, but this one was controlled enough to get to seal team six and retire as a major i think. funny. i wonder how many of those guys are borderline sociopathic. i would say a very large percentage are either borderline sociopathic or genuine committed true believes - as in very high in conscientiousness.

Anon --
Honestly, I don't know enough about him to say, but that travel fraud stuff cited in the article you linked does sound suspicious. I've seen several pictures of him, wouldn't describe the expression on his face as contemptuous, and even if it was, wouldn't necessarily look at that as an indication of sociopathy. Some people (like me) just have "resting bitch face."

I agree, though that the incidence of sociopathy among Special Operations is probably higher than average. You have to be fearless to do that stuff, and sociopaths are known for fearlessness. Plus it's a high status occupation, and they're drawn to that. (And thank goodness those guys are on our side rather than the opposing side, though I'm sure the same basic laws of human nature apply everywhere, i.e., in all military forces.

as an aside, the incidence of sociopathy among those who claim to have been Navy SEALS but who were not is right around 100%.