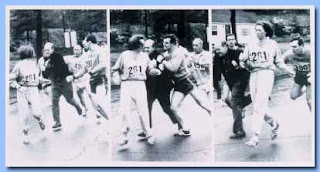 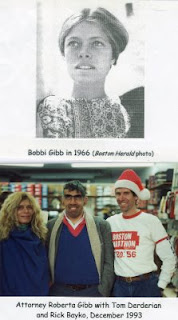 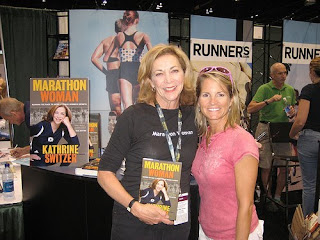 (above, the original incident involving Kathrine Switzer; on right, Bobbi Gibb, on top at the time of her run, and at bottom more recently as a lawyer; below, Switzer on left at a recent book signing)


Kathrine Switzer was in NYC yesterday signing autographs at the NY Mini 10K run. She is a minor feminist icon for having run the Boston Marathon back in 1967, back when women were prohibited from running marathons because it was thought to be dangerous for them to run that distance.

Switzer entered the 1967 Boston Marathon as K.V. Switzer, got an entry, showed up on the day of the race, and started running. When Jock Semple, the official in charge of the race, saw her running, he ran up to her and demanded that she turn in her number and stop running. Her boyfriend then shoved Semple and sent him flying. Switzer finished the race in four hours and twenty minutes. (Another woman, Bobbi Gibb, who had hidden in the bushes near the start, also ran that same marathon with much less fuss and finished an hour ahead of Switzer, despite having spent the previous four days and three nights on a bus from San Diego.)

Switzer later went on to become an excellent marathoner, winning the New York City Marathon in 1974 with a 3:07 and recording a personal best of 2:51 in the 1975 New York Marathon.

Certainly Switzer deserves credit for having run a marathon back in the day when popular opinion was that women were too fragile to do so. And it took a certain audacity to officially enter the marathon knowing that it was a men's race. Feminists the world over undoubtedly cheered when Semple was sent flying. And make no mistake, it was the photographs of this incident that made Switzer an international media star. But when a woman's boyfriend assaults someone, how does that make her a hero?

Semple was made out to be the villain in this incident, but think of it from his point of view. Switzer had entered under false pretenses, and Semple must have felt she was mocking his race, the same way people dressed as clowns had done in previous years. So it would have been perfectly natural for him to be angry. And bear in mind, Semple did not single-handedly decree that women should not be allowed to run long distances; at the time the AAU didn't have a single race for women above a mile and a half.

Switzer has since gone on to essentially make a career of that 1967 incident.

Bobbi Gibb, the woman who finished an hour ahead of Switzer in that original Boston marathon with much less fanfare, went on to receive her BS from the University of California in 1969, majoring in philosophy with a minor in mathematics and fulfilling all the pre-med requirements. (She claims she was denied admission to med school because of her gender.) According to Wikipedia:

"Gibb then worked with Professor Jerome Lettvin at MIT on epistemology and color vision while studying law. In 1974, Gibb entered the New England School of Law, graduating in 1978. She worked as a legislative aide in the Massachusetts State Legislature, studied natural systems, and pursued her interest in sculpture and painting. She joined the Massachusetts Bar in 1979. While raising her family, she practiced law, specializing in real and intellectual property. She worked, for part of that time, in patent law...In 2000, she produced a documentary on her art and running entitled Where the Spirit Leads. She pursues a career in art and writes on a wide range of topics including economics, spirituality, the nature of natural systems, and the phenomenon of subjective experience. Recently she joined the Cecil B. Day Neuromuscular Laboratory, in Boston, as an associate working to find the causes of and cures for neurodegenerative diseases, specifically amyotrophic lateral sclerosis."

I have no idea whether Bobbi Gibb was actually good at all of those things or was just a dilettante. (Either way, she sounds highly intelligent.) But she had the courage to try a lot of different things, and had the courage to run the marathon without a boyfriend for protection. It seems to me she'd make a far better feminist icon than Kathrine Switzer.
Posted by John Craig at 5:43 PM

This amazing incident was in Spirit of the Marathon, a great running movie. Personally, I think Kathrine Switzer did it the right way. There was no rule written that said women could not enter the Boston Marathon, it was just assumed. She ordinarily signed her name as K. Switzer too. It was just a more honest approach. Finally, she went on to create a series of marathons for women all over the world in which millions participated, so it is for that also she could be called a "feminist icon."

guy --
If Switzer went on to create a series of races for women, then that's very creditable.

I certainly have nothing against her, I was making the point that what Gibb did in Boston that same year -- after four straight days in a bus, with less fuss, and running the course an hour faster -- was more heroic. I tend to admire people with broader interests, too, and Gibb sounded much more versatile to me.

Switzer ran in 67, Gibb in 66 and 67 and smoked Switzer who was not an elite runner. Gibb is the first real hero. Switzer is a clown who has hawked this into a career what a joke.

I'm not sure why the two have to be compared of one better than the other. However, I don't think the fact that she had another man stand up for her undermines her guts in running the race. Plus, there were no other women around, so good for him. If we're looking at this from a feminist POV, Switzer comes out on top as a real feminist would sign up for the race. One who isn't strong enough to stand up for those ideals and simply wanted to run would hide in the bushes. If we're comparing them from a runners POV, then Gibb comes out on top as she finished faster. Having said that they're both amazing women in different ways. William, switzer continued to run therefore she made a career on running.

Bobbi Gibb was a terrific runner, but you are wrong to say Kathy Switzer made a career out of the 1967 Boston Marathon. That was just the beginning. For the next few years, she trained her ass off, and won the 1974 NYC Marathon in ungodly heat, finishing in 3:07, nearly a half hour ahead of the second woman. The next year, she set a marathon PR in Boston with a time of 2:51, finishing second. As much as anyone else, she promoted the cause of women's running and helped convince the IOC to launch a women's marathon at the 1984 Olympics. She has proved herself over and over. Don't pull her down.

In 1966, Bobbi wrote openly and honestly, not disguising her name or gender, to the BAA for an application to run and was refused on the grounds that it was a men's division race in which women were not allowed to run and more devastatingly, that women were "physiologically" unable to run marathons. ( Ref To Boston with Love and Wind in the Fire a personal journey by Bobbi Gibb) The BAA would not send her an application let alone a number.
What Bobbi did took a lot of courage. She challenged the status quo. Unprotected, she hid in the bushes because she knew how important her run was and she didn't want to be stopped. Once she jumped from the bushes she was boldly in view. She has said that the men, who could have pushed her out, were supportive and she wanted to end the "war between the sexes" and to create a world where all men and women can reach their full potentials as whole human beings.
Bobbi returned again in 1967 and stood in open view to one side of the starting line. She waited until half the pack left then she made her dignified demonstration. In 1968 Bobbi returned again, still making her demonstration. All women were running in the unsanctioned Women's Division Boston Marathon until 1972, when a change in the AAU rules allowed women's marathons to be sanctioned.
Roaddust5

It wasn't a "manly" action on Jock Semple's part. If women weren't allowed he could have had her disqualified. Instead he tried putting his hands on her. He will be forever remembered in that photo.

This was before anger management classes were available. By putting his hands on Ms. Switzer would put him in jail for assault today.

Kathrine Switzer and Jock Semple became close friends later in life. I think there is a lesson there too.

I don't think it's fair to say one persons methods were better than another's because one can run faster. I personally think signing up and paying for the marathon is better than running rogue. However, each women dealt with the system in the way each thought it needed too. Switzer felt the need to sign up, and Gibb felt the need to run rogue. I'm fine with both. Each person has their own skill sets and ideas, and both pushed the conventional stereotypes. I applaud both women for open doors for future generations, no matter their methods. I will not bash either and say one is better than the other. Neither had to hurt another human being in doing so.

Gibb first ran the Boston Marathon in 1966 after being not allowed to officially enter, the year BEFORE K. Switzer entered and ran. Switzer's first Boston marathon was Gibb's second, and Gibb was definitely the better runner. Both runners had to engage in, or at least believed they needed to engage in at least a little deception in order to complete their runs.

Why do we compare women?! Both were trailblazers and fabulous role models for us gal runners following in the 70's.