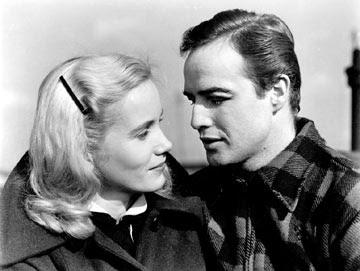 My parents mentioned a few days ago that they were recently introduced to Eva Marie Saint by mutual friends. They now see her around their neighborhood in Montecito, and chat occasionally.

My first reaction was wow, cool!

My second reaction was, what exactly is it about meeting a movie star which is so cool, but also weird? After all, they're only actors, who as a group tend towards dysfunction.

Here's a clip with Saint and Marlon Brando from On the Waterfront which partially explains the allure:

If we were to meet Ms. Saint, we wouldn't just be meeting the actress, we'd feel as if we were meeting Edie Doyle. And, for that matter, Eve Kendall from North by Northwest:

At a certain level, we see movie stars as whoever they've played. It's hard not to conflate the actor with the character. (The stars themselves are not supposed to make that mistake, though, as per the previous post.)

And when the movie the actor starred in is a revered classic, you feel as if you're meeting a part of Americana.

Surprisingly, Saint was already 30 when she played the teenage Edie Doyle in On the Waterfront. Which brings me to how many react to meeting a star: it's always a little shocking to see that an Edie has gotten old, or that an Eve Kendall now has wrinkles.

But onscreen, they're immortal -- and forever young.

My mother asked, "Do you know the most frequently asked question she gets?"

It wasn't hard to guess: What was it like working with Marlon Brando?

Saint's stock answer is evidently, "Why did no one ever ask him what it was like working with Eva Marie Saint?"
Posted by John Craig at 4:45 PM

Regarding movie stars, as a child, my parents took us (five kids) on a camping trip out west (Ohio to California and back). During our travels, we went to some movie site in Oregon (?) and saw Paul Newman - our mother was thrilled to see him, saying hi to him and snapping his picture. We travelled in our Catalina station wagon with a camper attached to it. That was a fun vacation, back in the early 70's.

Birdie --
thank you for reading all these old posts. Yes, Newman was a real star, back in the day when male movie stars were really handsome, too. He was even a good actor, too.

I think I caught a bug so I'm relaxing. The summer vacation was fun, definitely having it's moments, all our mother's idea to go camping. We saw Mimi Eisenhower at possibly Ike's Presidential library, swam in cold mountain lakes, and had plenty of times when our station wagon overheated (my dsd usually saying, "I'm never going camping again"). It was a memorable trip.

Birdie --
Glad you find reading the blog relaxing. I had a similar trip with my parents in the summer of 1971, driving up the West Coast and then back across the country. We went dune buggying in the Oregon dunes, saw the state fair in Salem, Oregon, went to Seattle, and went to Glacier National Park. Memorable.

Paul Newman was originally from Ohio. His family owned a sporting goods store in Rocky River, OH or Lakewood, OH, one of the two (my memory is not as good as it use to be). We have a bad cold going through our house, so I'm trying to take it easy. When we saw, Paul Newman, we were on the west coast, my guess is Oregon for some reason, although it could have been California. I know that he was making a movie. I remember my mother saying "hi" to him and then he looked at her. She snapped a picture of him. My mother was very happy.

Birdie --
You know, I bet he was shooting "Sometimes a Great Notion," which set in Oregon. The movie came out in 1971, which means it was filmed in either '70 or '71. Never saw the movie, but it was one of my favorite books of all time.