One of the three greatest athletes Cuba ever produced was Alberto Juantorena, who won the 400 and 800 meter runs at the 1976 Olympics. (The other two were probably Teofilo Stevenson, the three-time Olympic heavyweight boxing champion, and Javier Sotomayor, the high jumper whose world record of eight feet and one half inch has now stood for over twenty years.)

Juantorena was a magnificent specimen: 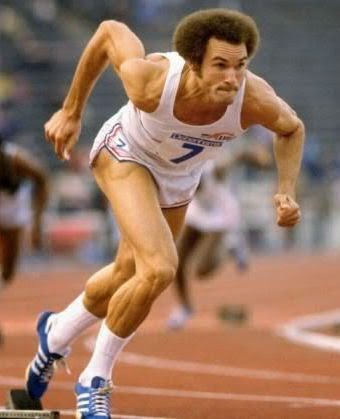 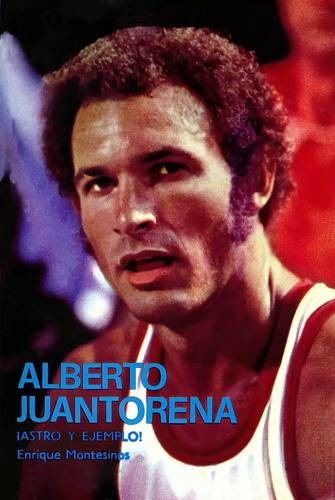 Back then, with his bushy unkempt Afro, and extraordinary running talent, I just assumed that he was a light-skinnned mulatto. In fact, that swarthy, somewhat racially indeterminate appearance would have made him look right at home fighting alongside Fidel and Che twenty years earlier.

But to look at pictures of Juantorena now, with his shorter, straighter hair and light eyes, it's hard to discern any black blood: 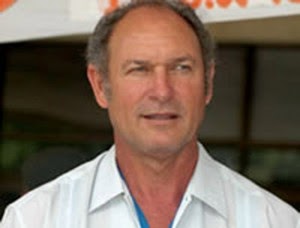 And with his strongly androgenized, Anglo-ish features, he looks almost like the chief of a police department in the South.

In any case, there are worse fates than going through life looking like El Caballo ("The Horse"), as Juantorena was known in Cuba.

I was reminded of Juantorena because Cuba has been in the news this week. But when I Googled him to see what he looked like now, I stumbled across the following picture, which made me wonder about something that had never occurred to me before. Is it possible Juantorena was on steroids? He certainly dwarfed his competitors in the 800, both in terms of height (6' 2.5") and musculature. Usually when I say on this blog that someone is juicing, I'm completely convinced of it; I'm far from convinced about Juantorena.

But, it would be naive to entirely discount the possibility. He ran for a communist country at a time when the Eastern bloc was heavily doping its athletes. And his Polish coach would have been familiar with the advantage conferred by steroids.

On the other hand, Cuba, unlike East Germany, has never had the reputation of being a hotbed of doping. So, I'm agnostic on the issue. I just don't know.

What I do know is that as big a star as Juantorena was, and as good-looking as he was, he must have led a good life.

His muscle tone and definition are remarkeable but maybe that was due to the african genes that gave him that hair.

Those muscles, and perhaps the low body fat that reveals them, is more usual on a black man.

Steven --
But the weird thing is, once he got older, he really didn't look black at all. And even if he was, say, 1/8th, would that eighth be so dominant as to account for that muscle tone and definition?

And it's always possible that his curly hair was more of an "Isro" than an "Afro."

But as I said, I'm agnostic on the issue.

I don't really know how it works. Maybe you just need a particular bit of dna related to the muscles, like in genetic engineering when a small piece of dna can make a real difference to something. ??

I agree. It's hard to tell if he's black at all or if he's on steds!

I've always assumed he was a doper--he was, after all, a Communist Regime sprinter during the 1970s & 1980s (a time when virtually all Communist Regime athletes, esp. strength and speed athletes are presumed to have doped); he had freakish muscularity (read: combo of muscle mass and leanness; "muscle density" of his sort is seen almost exclusively among the enhanced)for an 800 meter runner; he accomplished the elusive the 400-800 double (only the lovely and feminine Jarmila Kratochvílová did likewise in recent years)while also running on the 4x400 relay team, he peaked at a relatively late age after being good-but-not-great in his early 20s...Walks like duck, etc.

Bone Daddy --
Ah, so you're a longtime track fan, like me. Everything you say makes sense, but Cuba really didn't really have many successful athletes during that era except for Teofilo Stevenson, who never looked like a doper to me.

I'm going to remain agnostic on Juantorena. He didn't look quite that freakish to me, and the comparison to other 800 meter runners isn't quite fair as most of them were 800/1500 guys, so were built more like distance guys. If you compare Juantorena to all of the great 400 meter runners, especially Michael Johnson, he doesn't seem overly muscular. (Of course, Johnson --like Quincy Watts and a host of others -- was unquestionably doping.)

Cuba did have another successful 800 meter runner a little later, Ana Quirot, who might have been doping too. She was cut in the Maria Mutola mold.

Yes, my reaction to Kratochvilova as well. I remember hearing at the time that she could bench 200 pounds, and my reaction was, is that all? She was definitely one of the toughest-looking men I've ever seen.