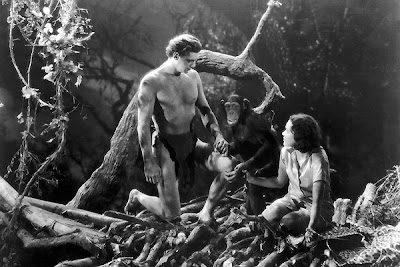 It's sometimes surprising to find out that movie stars you might have assumed were dead are in fact still alive. For instance, did you know that Ernest Borgnine, who played the cruel sergeant in From Here to Eternity, was still alive at age 94? Or Joan Fontaine, 94, who was nominated for an Academy Award for her role in Rebecca in 1940? Or Celeste  Holm, nominated for an Oscar for All About Eve in 1950? Or Eli Wallach, 96, the ugly one in The Good, the Bad, and the Ugly?

I had no idea that Cheetah, who achieved fame in the Tarzan films of the 1930's, was still alive, until this morning, when I read the following AP article stating that he had just died at the age of 80:

One has to wonder if Cheetah was aware of his fame. If he was, was he resentful that he was typecast? He never even got a single speaking part. But perhaps becoming a crossover star wasn't really his ambition.

What would he have thought if he had seen the Planet of the Apes series? Would he have exulted in the ape's triumph over humans? Or would he have objected to the way they were portrayed: every bit as venal, selfish, prideful, and vicious as humans.

Wild chimpanzees evidently have an average lifespan of 45 years, so it's not entirely certain that this was actually the original Cheetah, and not just an impostor.

If it was him, even if he never really escaped the chimpanzee ghetto, at least he had the satisfaction of outliving costars Johnny Weissmuller and Maureen O'Sulllivan.
Posted by John Craig at 10:29 AM