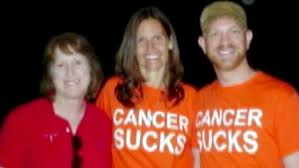 (Martha Nicholas, center)
An article appeared on AOL News today about a woman who pretended to have Stage 4 ovarian cancer, and obtained money from people for her treatment, thereby pulling off a neat sociopathic double play.

Scamming people for money is the province of con men, and con men are usually sociopaths. But getting money under false pretenses by itself does not necessarily mean sociopathy.

Most con men take advantage of others' greed. That doesn't justify what they do, and only makes it slightly more palatable. But if you're ripping off people who are trying to help you, who feel sorry for you, you can't possibly have any shame.

And not feeling any shame is the defining characteristic of a sociopath.

Martha Nicholas almost undoubtedly has Munchausen's Syndrome, which causes people to feign illnesses in order to gain sympathy and attention. Munchausen's is never exhibited by nonsociopaths. Nicholas's "illness" probably started off merely as a ploy for sympathy, since affect-hungry (meaning, hungry for affection) sociopaths have a bottomless need for positive feelings from others, and will do anything to get them.

Imagine that people are holding a large fundraiser in your honor, to help you fight your "illness." You smile bravely and try to fight back the tears as you say that you don't know whether each day will be your last. You're not really sick, you're just a malingerer. Yet you bask in the sympathy and attention you are receiving. Wouldn't you feel just a little bit embarrassed?

Nicholas’ attorney, Sam Simpson, said, “This was not a scam to rip people off. There is an illness. It’s a mental illness, and I can’t say more about this.”

The mental illness he is referring to is Munchausen's Syndrome. He will undoubtedly evoke it in her defense at her trial, and hope that people don't realize it's just a form of sociopathy.
Posted by John Craig at 2:38 AM

What a loaded topic! I've treated many such individuals in my career plus have known others who have munchausen's and yes, it does appear to be another form of sociopathy. This form of deviant behavior, while abnormal and hurtful to others, is anyone's guess as to causation. It's somewhat like pedophilia which I can't imagine someone consciously choosing and therefore it's considered a mental illness--similar to Munchausen's. There are many other similarities too numerous to mention which begs the question: are they sociopaths or mentally ill? Brian

Brian --
It's sociopathy. Think of it this way: we all enjoy sympathy and attention, but most of us wouldn't lie and cause all sorts of destruction in order to get it. A sociopath has so little shame that they don't mind lying to get whatever they want, be that money or attention.

True, nobody chooses to be a sociopath, our character has mostly to do with the way we were brought up. But that doesn't negate the fact that sociopaths, whether they malinger or not, are incredibly vile creatures.

The lawyer said it "was not a scam to rip people off". Hmmm, seems as if the transfer of funds from the pockets of others into hers was an intended end result. She didn't hold herself out as a cancer victim just for the attention and sympathy it brought her but also used it as a vehicle for financial gain, thus being a win-win game for her on all points. After all, how many "illnesses" do people have that actually fatten their bank accounts rather than depleting them? The lawyer must realize all this yet blatantly lies, apparently with a straight face . Methinks the lawyer himself is something of a sociopath.

It's possible the lawyer is a sociopath, but then again, he's also a lawyer just doing his job. Most defense lawyers have to lie, or at the very least spin, as part of their jobs, and I don't think the majority of them are sociopaths.

Any idea whether those are family members in the photo with her? How embarrassed they must feel at the revelation that she was never sick (at least not physically sick). If she has Munchausen's, is it likely that she's done this kind of thing before? Seems like it would be difficult to get away with a scam of this magnitude more than once. Guess you'd have to move around a lot. It's people like Martha that make me hesitant to contribute to many charities and causes that may be truly legitimate. You just never know.

Don't know, but I'd guess those are not family members; her family probably would have known her well enough to be suspicious.

And you're right, sociopaths are not known for their long-term friendships.

Hey John, Just for what it's worth. I read a famous philopopher a long time ago that if a person questions his sanity then that's a pretty clear indication that that person is not nuts, or a sociopath/psychopath. Whereas one who takes it for granted that he or she is absolutely free of any mental problems are usually the ones who do have them and do not want to expose themselves. To make matters worse, I do not believe that we're talking black and white all the time. I often question whether or not I'm crazy which makes me anything but. That said, I'm a pretty nutty guy--just ask anyone who knows me:)

Brian --
I am absolutely free of any mental problems.

I wish I could say the same! On some level, aren't we all a little crazy? (except you)

As someone that was one of her victims, I couldn't agree more...SHE IS A SOCIOPATH! still today, she is claiming amnesia and has no memory of having faked us all out for 20 years of faked cancers!

Take a look at these she wrote in 2003, published on this writing website in 2008. She claims they are works of fiction but sounds more like auto-biographies to me!

CHECK out the story 3000 miles shattered next door... the synopsis alone with catch your attention!

AnotherMarthaVictim --
You have my sympathy. We all get fooled by our first sociopath. Hope you're able to get some of your money back. Unfortunately, there is no recompense for the feeling of having been lied to and used.

The woman who enlightened me about sociopathy when I was 25, coincidentally, claimed to have cancer when she didn't.

For the record... her husband claims he was clueless, of which none of us believe. Personally, we all think he was in on it.

He slept next to her for 16+ years. he never, in that time, went to a single doctor appointment? Saw a single bill? took a phone call? just doesn't add up!

AMV --
You're probably right, it's highly unlikely, although sociopaths can be very convincing. (Sociopaths don't usually marry other sociopaths, they prefer people they can dominate.)

This video link (WRIC TV 8) provides a good description of the Martha Nicholas case. I'm not super convinced that this woman is motivated by money but who knows? http://www.wric.com/global/Category.asp?c=190525&autoStart=true&topVideoCatNo=default&clipId=6552713&flvUri=&partnerclipid=

Anon--
Thank you. That link was very illuminating; it shows how sincere a sociopath can seem even while lying.

I think the whole thing started off as a Munchausen's-style bid for sympathy, then when she saw she could make some money off it, turned into a scam.