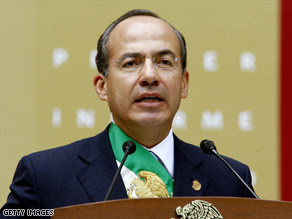 
Is there another country in the world which has a law equivalent to our Fourteenth Amendment, which states that any baby born in this country is a US citizen?

Certainly not Mexico, whose own immigration laws are downright Draconian when it comes to illegal -- or even legal -- immigrants:

In Mexico, anybody who enters the country illegally has committed a felony punishable by two years in jail. Anybody who enters the country a second time after being deported is subject to a ten year jail sentence. Law enforcement personnel at every level are obligated to enforce their immigration laws, including arrests and deportations. Native born citizens have the authority to make citizens' arrests of illegal aliens and turn them in to the proper authorities. All citizens must carry an identity card. Visitors who do not have the correct documentation are subject to arrest as illegal aliens.

What's even more interesting is Mexico's policy on legal immigration: new citizens are allowed in only "according to their possibilities of contributing to national progress." Immigration officials must be sure that "immigrants...have the necessary funds for their sustenance" and for that of any dependents. Foreigners may be barred from Mexico if it is found that their numbers "affect the equilibrium of national demographics" and "if they are not found to be physically or mentally healthy." And a Mexican who marries a foreigner just so that the foreigner can get the equivalent of a green card is subject to five years imprisonment.

And yet Mexican President Calderon berates us for Arizona's new law, which is far easier on illegal immigrants than Mexico's own laws.

The good news is, if Mexico does continue to only allow in immigrants who will help their country, while we provide amnesty for every last illegal who has snuck across the border, this will actually provide a long term solution to our illegal immigration problem. (In another hundred or so years, Mexicans will no longer want to come here so much.)
Posted by John Craig at 11:50 AM