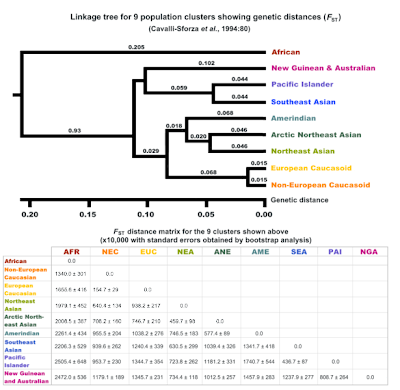 I apologize for the small size of the type in this chart, but this was as big as I could make it on this format. This chart shows how the different racial groups split off, and which are most closely related to each other.

In case you can't read it, here it is in larger scale:

I was talking to a friend the other day and he said something which indicated that he thought that sub-Saharan Africans and Australian aborigines were related. I disabused him of that notion, and then found this chart as proof. The lower chart, which shows how closely related each group is to each other, is a little easier to understand. Sub-Saharan Africans bear a superficial resemblance to Australian aborigines and other Pacific Islanders, like the Melanesians. But Africans are in fact genetically further apart from aborigines and other Pacific Islanders than any other two major racial groups are.

The friend I was talking to is black. So, naturally, I informed him that it was high time for him to unite with his Caucasian brethren against those savage darkies from Australia.
Posted by John Craig at 8:53 PM

I’m having trouble with the theory that high temperature climate humans evolved wide nostrils because there is lower oxygen in high humidity climates….. What is the percentage reduction in O2 due to higher humidity? Wikipedia has water vapor in air varying from trace amounts to 4%. So in rough terms we could have 79% N2, 21% O2 and 0% H20 through 75.8% N2, 20.2% O2, and 4% H20. And by Darwinian terms we must believe that this one lived due to wider nostrils, and that one died before it could reproduce as well due to narrower nostrils – when the mouth is a gigantic orifice by comparison. And this pattern would have to continue well enough to create an entire population with wide nostrils. I’m not seeing it – how do you see this panning out?
Ed

Ed --
You know what, you're right. Basically I was being lazy by just citing something I had heard before without really thinking about it. But now that you point out the fallacy of the reasoning, it's clear that theory is wrong. It's probably much more likely that all humankind had wider nostrils, simply because they take in more air, and Caucasians may have been evolved narrower nostrils over time for heat retention reasons. Thank you for your correction.

I heard wider nostrils was for hotter climates...or rather narrow nostrils for colder climates. Something to do with warmer the air up as it goes through the nasal passage. Not sure how true that can be.