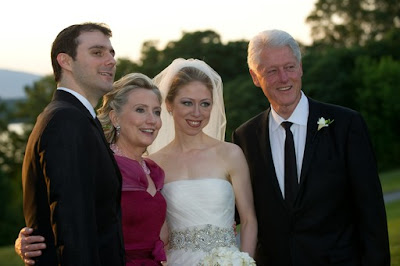 Marc Mezvinsky, the Goldman Sachs banker who just married Chelsea Clinton, comes from an interesting family.
His father, Ed Mezvinsky, was a con man who was eventually convicted of several dozen counts of fraud and spent five years in federal prison. He still owes his various victims $9.4 million.
It would seem unfair to condemn the son for the father's behavior. But there is an old saying: the apple never falls far from the tree. From what I've seen, there's a lot of truth to it.
If Marc is as slippery as his father, he is working at the right firm.
And he's married into the right family.
Posted by John Craig at 1:56 PM