How did cavemen pick up women? 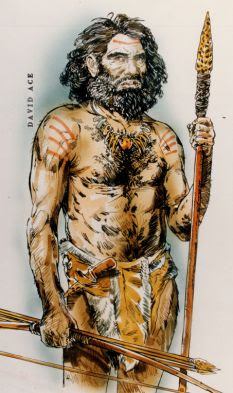 What tactics did men use to seduce women back in the Stone Age?

Showing off your car was out of the question. Likewise, showing off your house would have been difficult. Though if one had secured a particularly cozy and safe cave, that could have its benefits.

Dressing stylishly was not an option either. Though if one wore a nice fur, it would be a good indication of one's hunting prowess. And if that fur didn't smell too bad, it would also show skill at curing hides. (Maybe the pimps are onto something.)

Hard to say whether a snappy line of repartee would have had much effect. Language must have been in its infancy then. Then again, a sense of humor, which women almost universally say helps in seduction, can be employed virtually anywhere -- or anytime. One suspects that caveman humor would have been less wry irony tinged with a rueful awareness of postmodern sensibilities, and more slapstick. But either way, a sense of humor proves above all else that one is sane, which is always reassuring to one's prospect. (Insanity must have been even scarier back then, given the lack of tranquilizers and straitjackets.)

Mood music was definitely out. No handy iPods with which to regale her. Not even any phonographs with vinyl records. Then again, singing ability would have been a huge plus, since your prospect most likely had never heard music before. (It is highly unlikely this technique was used often.)

Grooming would have been difficult, since mirrors didn't exist. (In fact the only way of gauging your own attractiveness would have been through others' reactions to you.) And with the concept of bathing still far in the future, body odors must have been overwhelming. But if everybody smelled the same way, perhaps one didn't notice.

Men didn't shave back then, but a full, thick beard would have signaled testosterone and health. Youthfulness, then as now, must have counted for something, since it signals more years in which one can act as provider. The difference is, back then there were no artificial ways with which to enhance the appearance of youthfulness.

A candlelit dinner at a fancy restaurant was out. But cavemen had something even better: meat with which to augment a protein-deficient diet. There's nothing like near starvation to make practically any food taste like a four star French meal. And the gratitude aspect of avoiding starvation would have been even greater.

Courage (of a less than suicidal variety) must have been appreciated; after all, if you are unwilling to get close, how could you ever kill a buffalo? Or protect your family from a bear?

Equally important in the Stone Age was a network of friends. Not the kind who acknowledge you on Facebook, but rather a closer group, the kind with whom you could kill large game. Bringing down a mammoth was a group effort, so having that close knit band was often vital to procuring food.

Intelligence was important. Figuring out animal migration patterns, identifying game trails, understanding animal habits, building a better trap, recognizing danger, and being able to orient oneself by the stars were all useful. Since a caveman's entire life was pretty much what goes into the "don't try this at home" category of behavior today, there was less room for stupidity and error.

A full accounting of "seduction techniques" back in the Stone Age back then would have to acknowledge the possibility of rape. The popular stereotype of a caveman clubbing a woman and dragging her off to his cave is probably based partly on the absence of prison terms back then. But the risks one ran did include angry brothers and fathers, and even angrier mates. Not to mention the angry victim. So while there might not have been a long prison term involved, there was a potential death penalty. So if your prospect was well connected, it was not worth the risk. (Family values, caveman style.)

This quick glance at our forebears shows the antecedents of the seduction games played today. Guys on steroids are merely trying to signal that they are good hunters. Guys with fancy cars are just trying to show that they have resources with which to feed offspring. And guys with a sense of humor are only trying to show they won't go berserk and club everyone to death.

Excellant advice. Arcadia's Romantic Getaway and Nudist Private Club in Shelton WA will be using your blog on it's Facebook to spice up Caveman thinking for an upcoming event..probably would also work well for general Couples' advice.

Kathy --
You're welcome to use the blog for your Facebook site.....on the condition that you continue to read the blog.