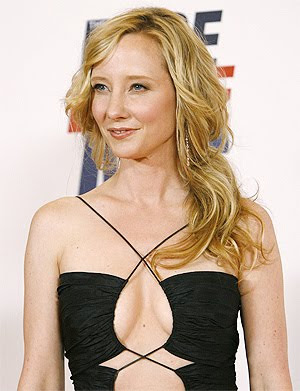 Anne Heche was in the news yesterday morning for her recent appearance on Letterman where she talked about a recent robbery at her house. My first reaction was to wonder whether the burglary actually took place. I couldn't tell from that video segment, but did notice that she seemed extraordinarily pleased with herself. She talked about how her son wasn't concerned about the missing computers, or rugs, but suddenly got very concerned when he found out the Wii had been stolen. Awww, how cute -- and how cute, by extension, she is. She certainly seemed to think so as she talked.

Heche's performance was reminiscent of her acting in Six Days, Seven Nights, the 1998 clunker she starred in with Harrison Ford. I watched the entire thing, to my regret, and was struck at the time by how self-consciously cute she acted throughout the movie, as if she assumed that moviegoers would be charmed by her impetuous stupidity.

Heche's most famous relationship was not with Ford, but with Ellen DeGeneres. That entire romance struck me as patently false, at least on Heche's part. Heche had been heterosexual her entire life, then claimed that when she saw DeGeneres across a room she experienced love at first sight. (DeGeneres may be a good comedienne, but it's hard to imagine her facial features sparking that reaction in any but the most ardent of gold diggers or fame seekers.)

DeGeneres, of course, just happened to be the biggest star Heche could hook up with at the time. Heche had undoubtedly seen all the positive publicity DeGeneres had gotten by coming out right before this, and wanted some of that attention for herself. So every time the cameras were rolling, Heche would intertwine herself with DeGeneres, to flaunt their "forbidden" love. (Sorta like Tom Cruise, except the other way around: people who try too hard always betray themselves that way.)

Immediately after her relationship with DeGeneres ended, Heche went back to being heterosexual, and has remained so since.

Is sexuality really that pliable? I know of people -- some very decent -- who've attempted to lead straight lives but eventually surrender to their true natures and come out as gay. But Heche is the only hetero I know of who went gay in a very public way, then returned to heterosexuality.

Sexuality is evidently much more pliable when employed in the service of overweening ambition.

Anne Heche, Wikipedia, the Early Life section: "Her father was an organist, church founder, Baptist minister, and choir director." (Do I hear "con man"?) After that, we don't even have to read between the lines: "In her book, Call Me Crazy, she claimed that her father molested her during her childhood, giving her herpes simplex. Her father later disclosed his homosexuality to his family before dying of AIDS in 1983."

There are two possibilities here. The first is that the father did in fact molest her, which would explain her character perfectly. The lack of a bond with one parent, and another parent who is so oblivious that she didn't even realize what was going on, or didn't care, is fertile soil for dysfunction, at the very least.

The second possibility is that Heche is lying, and that her father did not molest her. He was, after all, a homosexual, and while I've heard of piggish (and probably sociopathic) heterosexual men who molest their daughters, I've never heard of a homosexual who molests his daughter. If Heche is disgracing her father's memory by lying this way, that, too, would be all we'd need to know about her.

Call Me Crazy is the perfect title for a book by a sociopath, by the way. It's another way of saying, "You're not going to believe this, but --" which is of course a common way of forestalling disbelief.

According to Wikipedia, "On August 19, 2000, Heche knocked on the door of a home in Fresno, California. Dazed and scantily clad, Heche said her SUV had broken down, asked to take a shower, and then made herself at home. When the police arrived a short time later, Heche, who had publicly announced the end of her headline-grabbing three-year relationship with DeGeneres the day before, declared she was God and would take everyone back to heaven in her spaceship. Press reports at the time explained that her disorientation was the result of mental illness—fueled by the drug Ecstasy, according to Heche—stemming from childhood abuse by her father, which led her to create an alter ego named Celestia, who was 'daughter of God, half-sibling of Christ, and that she was to spread a message of love to this stricken planet before ascending into Heaven'."

Was this a genuine breakdown or just fakery? People do hallucinate while under the influence of Ecstasy. But did she actually take the drug? The bit about the alter ego she'd had to create because of her childhood molestation seems less than credible. If she were a split personality, why had Celestia never made an appearance before? Would the daughter of God and half-sibling of Christ -- who had, according to Heche, been around since her childhood molestation -- really be so shy and self-effacing as to not make an appearance before Heche turned 31?

If Heche was feigning insanity, she wouldn't be the first to do so. Kenneth Bianchi, one of the two infamous Hillside Stranglers from LA in the 1980s, faked having multiple personalities when first caught. His ruse was uncovered by a particularly astute psychiatrist. The idea was obviously to set up an insanity defense: I'm not evil, just crazy.

Compartmentalizing is quite common among sociopaths. But it is not the same as having genuinely multiple personalities, which is extremely rare. Could Heche have been thinking along the same lines as Bianchi? She had less pressing motive, but it's always preferable -- from your point of view -- for people to think you off-balance than to see you as a shameless liar. The former gets you sympathy, the latter well-deserved hatred.

Heche got married in 2001 to Coleman Laffoon. After they were divorced in 2009, Heche appeared on David Letterman to complain about the $3700 monthly support she had to pay Laffoon, called him a "lazy ass" and said, in reply to a question about his job, "He goes out to the mailbox and he opens up the little mailbox door, and goes, "Oh, I got a check from Anne! Oh, I got a check from Anne! Yeah!"

Some people are just so filled with poison that they have to let it out, no matter how inappropriate the venue.

My guess: Heche is a sociopath.
Posted by John Craig at 7:03 AM

I can't imagine..not a single response to this post? Anyway, thank you for your observation on this one. I've recently begun to think the same thing of her, and find her quite manipulative and cunning....sort of a predetor posing as prey...and I'm begining to think this runs in her family...judging soley on my recent expirences with her mother...

Her mother? Interesting, thank you, and that makes sense.

Yes, sociopaths often pose -- or even see themselves as -- victims, although the truth is the exact opposite.

Take a look at the research on sexual ranges by Kinsey. This is not necessarily a fixed identity issue. Is the measure of anger and dismissiveness not proportional to the threat to our gay identity? If we are so certain of our immutable homosexual identity why the vitriol over those who switch?

Anonymous --
I don't put much stock in Kinsey's conclusions; he seemed to have a certain agenda.

I have no vitriol over those who switch, however; my disgust with Heche is over the opportunistic nature of her switching.

Anne Celeste Heche (HAYSH; born May 25, 1969) is an American actress. Her film credits include Six Days Seven Nights, Return to Paradise, I Know What You Did Last

Summer, John Q and Volcano. She also starred in the television series Men in Trees, Hung, and most recently Save Me........ Continue Reading @

Bringing us up to date, don't forget that Heche was fuking around with the cameraman (who she later married) while she and Ellen and the cameraman were traveling by motorhome from venue to venue where Ellen was doing stand up. Ellen found them messing around during this time which led to their break up. Heche later claimed that Ellen had been so depressed after the cancelation of her show due to her "coming out" episode, that Ellen's despair was too much for her to handle. Her answer was to start fuking the cameraman in front of Ellen. Later Ellen wrote that this episode was one of the lowest points in her life.

Unknown --
Thank you for that, I hadn't known the story behind that breakup. Makes sense. And it makes sense that Ellen would later describe this as one of the lowest points of her life, a close association with a sociopath will usually bring that about.