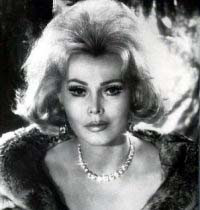 Zsa Zsa Gabor was in the news recently for having landed in the hospital with some broken bones, and conflicting reports about her condition. She had been off the radar screen recently, understandably enough given her age of 92.
Zsa Zsa wasn't quite famous for being famous the way, say, Paris Hilton is now, but she was definitely a spiritual predecessor. (Coincidentally, she actually married Paris's great grandfather Conrad Hilton at one point, and later claimed that her only child was the result of a rape by him -- while they were married). Zsa Zsa had an acting career of sorts. Strangely, she didn't start in films until 1952, when she was 35. She never broke into A films, but more importantly, her starlet status gave her the platform from which to attract a better, or at least richer, class of suitors.
In the end Gabor was more famous for her many marriages and her personal dramas than for her film career. (Quick, name a film she was in.)

Gabor was married nine times, several times to rich men. (She once claimed that she was a good housekeeper because every time she got divorced she kept the house.) The longest marriage before her final one, at age 69, lasted six years. Evidently once the passion ran out, so did the marriage. One of her marriages officially lasted for one day, from April 13, 1983, to April 14. That marriage was annulled because the previous one hadn't been properly ended yet. (Another quote: "I believe in large families. Every woman should have at least three husbands.")

What is someone who gets married that many times thinking? Samuel Johnson once famously said that getting remarried is the triumph of hope over experience. Was Gabor really that hopeful? Or was there a certain underlying cynicism involved there? Certainly by the fourth or fifth time she coudn't have been taking that "till death do us part" vow too seriously.

Liz Taylor once said that the reason she got married all those times was because she was an old-fashioned girl who didn't believe in sex outside marriage. Not having sex outside marriage certainly is an old-fashioned concept (although getting married eight times doesn't seem exactly traditional). But that doesn't seem to be the case with Gabor, who worked hard at appearing the sexpot.

One of the two pictures of Gabor in the article on her in Wikipedia features her with Porfirio Rubirosa, the famous Dominican playboy/gigolo. In that picture (above) she looks happy, so maybe Rubirosa's reputation was justified. Then again, women who flaunt their sexuality the way Gabor did are often not really that interested in sex themselves. Mostly they just need attention. And Gabor probably figured there was no better way to get attention than with Rubirosa.

In a sense Gabor's entire life was a bit of performance art, a term not around during her era. The Hungarian accent was a little too exaggerated, the display of wealth too self-consciously ostentatious, the various romances too histrionic and overblown. So who was the real Zsa Zsa? Whoever she was, after the course of all those decades paying the sexpot, she probably got lost and forgotten, even by Zsa Zsa herself.

In any case, when Gabor's obituary appears -- most likely in the not too distant future -- it will allow us to take a trip down memory lane and marvel at how much times have changed. And how little.
Posted by John Craig at 1:48 AM