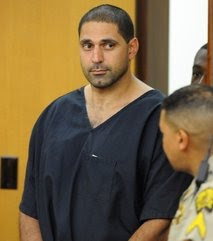 (Elias Abuelazam in court after his arrest)

From an AP article last night:

RAMLE, Israel – A man accused of going on a stabbing spree across three U.S. states and who was once suspected in a stabbing near his hometown in Israel has baffled profilers, who say murder does not appear to have been his goal.

So it remains a mystery as to what drove Elias Abuelazam, who relatives described as a shy man from a respected family who had recently become despondent. Abuelazam is suspected of attacking people in Michigan, Ohio and Virginia, leaving 13 people wounded in addition to the dead....

A family member in poverty-stricken [Flint] said Abuelazam had become unhappy about his personal life in recent months. And others in the Arab neighborhood where he grew up expressed shock that the man they knew could be a suspect in the gruesome attacks.

"I wouldn't believe it even if I saw it with my own eyes," said Abuelazam's 49-year-old cousin, also named Elias Abuelazam. He said that when his cousin last visited earlier this year, he was tense, unhappy and unsure what to do with his life. The younger Abuelazam said he wanted to get married and settle down in Israel. "He seemed confused," the cousin said. But he said suggestions that Abuelazam was a killer were "malicious rumors."

He said news of the arrest had devastated Abuelazam's mother, who was excitedly waiting for a text message to pick her son up at the airport when she heard the news. "She couldn't stand up ... She was hysterical," he said. In a brief radio interview, she described her son as a "religious, God-fearing man" and said she refused to believe he was a killer.

However, Israeli police said Abuelazam was a suspect in a stabbing attack early this year, although charges were never pressed. A senior police commander said Abuelazam was believed to have stabbed a close acquaintance in the face with a screwdriver during an argument in a parked car about six months ago. The commander said police dropped the case because the victim refused to cooperate with investigators. He said Israeli police would request samples of Abuelazam's DNA to investigate unsolved stabbings in the Ramle area.

The alleged victim in the attack, Ziad Shahin, denied being assaulted by Abuelazam but had a large scar from his right ear to his throat. Speaking outside his candy store in Ramle, Shahin said he was born with the mark. Ramle's roughly 3,000-member Arab Christian community is tight-knit, and residents were extremely cautious about discussing Abuelazam's past.

Acquaintances said Abuelazam's father died of illness when he was a baby, and that he was raised by his single mother and four sisters. The family owned a grocery store and two other shops in town, and the mother was well regarded. Abuelazam, a member of Ramle's Greek Orthodox community, attended two prestigious Catholic schools, they said.

All but four of [Abuelazam's] 18 attacks occurred the Flint area. The others were in Leesburg, Va., and Toledo, Ohio. In one case, the attacker used a hammer. The youngest victim was 15; the oldest 67. At least 15 victims were black, although there's no evidence that race played a role, authorities said. A motive was not known.

Robert Keppel, a retired Washington state homicide detective who profiles serial killers, said it's rare for someone to attack males exclusively. Whoever is responsible for the 18 attacks, "he's just getting off on stabbing people. He's not guaranteeing that they die," said Keppel, who investigated the Ted Bundy homicides in the Pacific Northwest in the 1970s. "For some reason, the satisfaction is just in the action of the stabbings," Keppel said. "He's only turned on by the act of the approach and the initial stabbing. He's got some hang-ups. ... He's a rare killer among rare killers."

Also Friday, police in Leesburg, Va., said they were investigating whether Abuelazam is responsible for the March 2009 stabbing death of a 44-year-old man who lived across from Abuelazam in a townhome community.

Usually when you read about a serial killer, the more you find out, the more neatly the picture of a sociopath fits together: either he was an orphan or had a mother who didn't love him. He was abused as a child. He had a special sexual kink which could only be gratified one way, through killing his victims, and felt no qualms about gratifying it. Or he had a consuming hatred for a certain type of person. And he exhibited a whole host of other behaviors which betrayed his sociopathic nature.

But this guy seems to have neither that background nor those inclinations. His mother seems to have loved him -- and still does, if her behavior is any clue. His father died when Abuelazam was a baby, so he wouldn't have been abused by him. He was raised in a household where everybody else was female, yet his hatred doesn't seem to be directed at women -- all of his victims were male.

The first news reports made the killer sound like some sort of KKK guy on a rampage -- but now it's not even clear that there was any racial motive; it may just be that most of the people he encountered on the street when he was in the mood to attack happened to be black.

When we hear of an Arab being responsible for multiple deaths these days, naturally our first thought is, "Islamic terrorist." But Abuelazam wasn't even a Muslim; he was a Greek Orthodox who attended Catholic schools.

There was no overtly sexual element to his attacks, and he didn't even bother to make sure his victims died so as to eliminate witnesses -- he just stabbed and ran. (Sociopaths tend to be more careful about covering their tracks.)

I can't figure this guy out at all. The more we hear, the more it sounds as if he's just some kind of Mad Slasher -- in the way newspapers of fifty years ago would describe some serial killer, as if he was just plain crazy.

That may actually turn out to the case here -- that there is some form of insanity involved. Stay tuned.

Elias Abuelazam, 33, was arrested Wednesday night in Atlanta before a flight to Israel, his native country, and charged with attempted murder in a July 27 knife strike in Flint that put the victim in a hospital for a week. Authorities said more charges were expected in Michigan, Ohio and Virginia