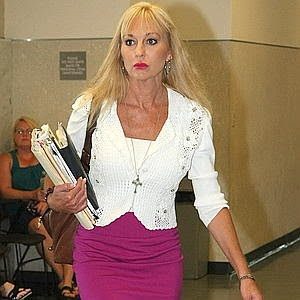 The NY Post this morning had a brief article about the woman who tried to extort $10 million from University of Kentucky basketball coach Rick Pitino:
A cop who took a rape complaint from the woman accused of extorting ex-Knick coach Rick Pitino said yesterday that she made crying sounds -- but never actually shed a tear.
Karen Sypher left out important details and contradicted herself several times when, during a taped interview in July 2009 at police headquarters, she claimed Pitino had raped her in two separate incidents, the sergeant who took the complaint testified yesterday.
At one point on the tape, he even confronted her about waiting nearly six years to file charges.
"I'm still trying to figure out: why now," Louisville Police Sgt. Andy Abbott, told Sypher, 50, after she was rambling about being a devout Catholic, her grandmother dying, and misgivings about having previously had an abortion....
She is accused of demanding college tuition for her children, her house to be paid off, and $10 million in exchange for her silence about a one night fling with Pitino on July 31, 2003, at the Porcini restaurant in Louisville.
That is pretty much all you need to know about Sypher. First, the crying sounds she made with no actual tears shed is a wonderful clue pointing to her emotional dishonesty -- as well as the perfect metaphor for sociopathy. Who pretends to cry without really crying? Someone whose modus operandi is to manipulate others. Most men's instincts would compel them to go to the aid of a crying woman; but cops deal with sociopaths all the time, and Sergeant Abbott saw through her immediately.
Her other statements, which had no direct bearing on the case, were also calculated to elicit sympathy. Talking about her "devout" Catholicism was aimed at winning over fellow Catholics, of whom she probably assumed Sergeant Abbott was one. Speaking of her dying grandmother -- if in fact she had one who was dying, and as if Sypher would care if she were -- was also calculated to milk sympathy. Finally, her "misgivings" about a previous abortion were calculated to make her look like a loving, feeling, caring person, all of which she is not.
The key word in the previous paragraph is "calculated." All of the emotions she displays are false, but she waves them around like a banner with "I am a Good Person" written on it. This phony emotionalism is a hallmark of sociopathy.
At another (but not entirely unrelated) level, this entire incident might also be read as a parable of greed. Had Sypher merely asked for $100,000, Pitino might have paid up and she might have gotten away with her scheme. But her greedy nature made her overreach, and that was part of her downfall.
It is often said that if you look into a sociopath's eyes there is nothing there. I often find this not to be the case. But if you look at the above photograph of Sypher, she does seem to be a bit of -- I'll go ahead and make the obvious pun -- an emotional cypher. The dyed hair, the slightly overdone makeup, the carefully fitted clothes meant to accentuate her killer body, all give a vague impression of falseness, but a lot of women dress to that effect, and it certainly doesn't mean they're sociopaths. But the blankness of Sypher's face is a little disconcerting.
Then again, I could be reading too much into her facial expression given what else we know of her. There is no misreading of her actions and words, however: they are all dead giveaways of her sociopathy.
Let's hope she gets a long sentence.
Addendum, 8/5/10: The jury at her trial found her guilty after just five hours of deliberation; she will be sentenced in October.
Posted by John Craig at 9:14 PM

Don't you just love when a gal like this wears a cross to her legal proceedings? The outfit is tight enough to show off her figure, but not flashy enough (or revealing enough) for someone to be able to say she looks slutty. Very calculated in a bimbo kind of way. The best is the way she hooks up with a married man she has never met before, but "cries" when she thinks about her abortion. I read something interesting in the NY Post this morning about how during the course of their "act" she started talking about how fertile she naturally was, that she got pregnant when her husband just looked at her. That caused Pitino to "withdraw," and tells volumes about Sypher's original motivation. Julie

PS-- I'd still like to know if this was a regular thing for Pitino, who previously always came across as a family man who had his act together. Another hyprocrite, or a man paying dearly for a 15 second mistake?

Julie --
There are a lot of phonies who hide behind religion. And yes, that outfit looks very well thought out. I read that same account in the Post; she definitely was out to "get" him from the start.

I don't hold it against Pitino that he strayed; something like 60% of all married people stray at some point during their marriage. Only 2-3% of the population is sociopathic like Sypher though. Then again, I don't follow Pitino close enough to know if he was a holier than thou family vales guy, which would make him a hypocrite.

Is it normal for sociopaths to pretend to be religious? The only sociopath I really got to know was always claiming to be a Catholic and told me he found it "really offensive" whenever I tried to argue against the existence of God.

Anon --
I don't know that it's normal but it's certainly one of their poses. They often try to appear as "noble" in one way or another, and religiosity is one form that can take. Sypher obviously figure that posing as devout would fool people into thinking her a good person.

Who knows, maybe she convinced herself at a certain level this way too (in that it made her "superior" to nonbelievers). A narcissistic personality -- and all sociopaths are narcissists -- can convince himself of his own righteousness regardless of the facts.