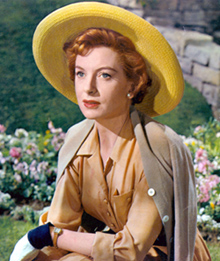 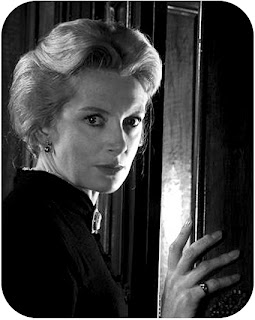 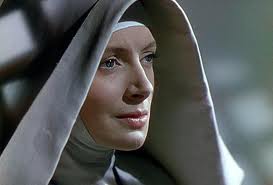 Two weeks ago in the post about Richard Rodgers I had mentioned that Deborah Kerr (1921 - 2007) was one of the all time great beauties of the screen. These pictures are -- or were -- an attempt to back that statement up.

She was certainly beautiful. But now, examining her face feature by feature, she seems no more beautiful than any number of models you see in the advertisements in Vanity Fair. So what was it that made her so incredibly appealing? (And what was it that left that impression of otherworldly beauty?)

It was partly her elegance and femininity, and partly her ability to express unrequited longing. (Put the two together and it's a devastating combination.) She was quite adept at embodying the well bred, tremulous refinement which directors -- and moviegoers -- favored back in the 40's and 50's, long before the advent of female buttkickers like Lucy Lawless and Angelina Jolie.

(Around fifteen or twenty years ago, Hollywood decided that one of the ways in which they would be politically correct was to show that women could be tough too. They did this by having women who were built like Angelina Jolie -- all breasts, with skinny arms and legs -- singlehandedly take on entire gangs of thugs, most of whom looked something like Vitali Klitschko, and send them flying with their punches and kicks. I'm as happy to suspend disbelief as the next fellow, but pleeeease.)

As a guy, whom would you rather be with, an elegant feminine type like Kerr or some snarling (fake) tigress who is always on the edge of violence?

It seems an easy choice.
Posted by John Craig at 7:41 PM