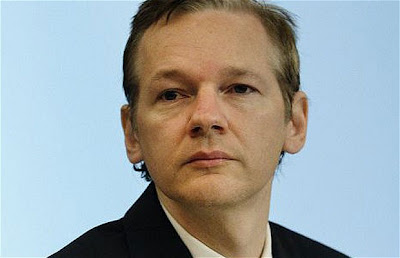 Most of us talk about other people behind their backs at least a little. And when we do so, we are generally confident that our opinions will not be passed along to whomever we're talking about. Sociopaths will often violate this trust. They love to tell people what others have said about them behind their backs. Many of the sociopaths I've known personally have taken great delight in sowing discord this way. They absolutely thrive on dissension.

Julian Assange of Wikileaks is essentially just doing this on a larger scale.

-- I said that he was "probably" a sociopath. Now that we can add "rapist" to his resume, that "probably" has morphed into "almost certainly."

Most Americans -- of every political stripe -- have reacted to the recent Wikileaks dumps with varying amounts of outrage. And understandably so: after all, the revelations have hurt the entire country.

But at a certain level, people should be responsible for their own words. When Barack Obama tells an effete San Francisco audience that the poor folks "cling to their guns and their religion and their dislike of people who aren't like them" he deserves to have those words exposed to the people he was talking about. Of course, that was said to an audience while he was campaigning for President, not in private to an aide; but it was still gratifying to see his words exposed to a wider audience.

When you think about it, wouldn't you want to know what others say about you behind your back? The answer to that question for most of us, is, of course, both yes and no. But if someone offered to tell us, we probably wouldn't turn it down.

None of this excuses Wikileaks. They are essentially doing what spies have done for ages: passing along secret information. The only difference is, instead of passing that information on to an enemy government, they are passing it along to the entire world. (That doesn't change the fact that they should be treated as spies, especially when you consider the fact that some Afghans have now likely been killed because their cooperation with us has been made public.)

The world basically wouldn't work if there were no such thing as secrets. (See the Jim Carrey movie Liar, Liar for reference.)

But imagine for a moment that the leaks were coming from the other side. Let's say Assange had access to al Qaeda's inner communications. Wouldn't it be gratifying to have them exposed? Wouldn't we appreciate the help? And wouldn't most of the domestic editorials be taking a different tone?

Or let's use an example involving someone we're not in direct confrontation with at the moment. Let's say Assange had access to all of the emails and cables -- and, for argument's sake, phone calls -- that passed between Vladimir Putin and Dmitri Medvedev. Wouldn't you want to see or hear them? The Soviet Union has disbanded, the Cold War is over, but Russia, while no longer our bitter enemy, is not exactly our friend. (And Putin spent his "formative years," if you will, growing up in the KGB; it's hard to imagine his instincts towards us have changed all that much.) Wouldn't it be interesting to know what Putin was really thinking when he sent troops into Chechnya? Or when he invaded Georgia? Or what he really thought of Bush, and Obama?

Or imagine WikiLeaks had access to all of the internal correspondence of the current White House. Wouldn't it be gratifying to find out exactly what discussions went on between Obama and Holder before Holder decided to drop the New Black Panther case? Or to hear what David Axelrod said to Obama after Obama called the Cambridge police stupid for having arrested Professor Henry Gates? Wouldn't it be illuminating to hear exactly what conversations took place between Nancy Pelosi and Henry Reid and Barack Obama as they twisted arms to get ObamaCare passed?

My sympathy for Assange has not increased one whit. And I continue to hope that WikiLeaks disappears. But I understand the glee with which some have greeted these exposures.
Posted by John Craig at 10:56 AM