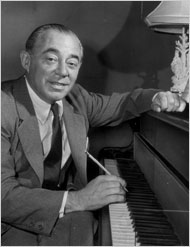 I've taken an informal poll over the last few days about who the greatest composer of the twentieth century is. The answers have ranged from George Gershwin (twice, the only composer to receive two votes) to Arvo Part (who's that?) to Stevie Wonder to Gustav Mahler (partially twentieth century) to Stravinsky to Aaron Copland to David Bowie to Philip Glass to a few others I can't remember.

My pick is Richard Rodgers.

The essence of good music is that it is moving. It doesn't have to move you in just one direction -- sentimentality -- but it does have to move you. As Tolstoy said, "Music is the shorthand of emotion."

Music can make us feel grandiose, sad, romantic, or exuberant. There's nothing intelligent about these feelings; then again, there's no such thing as an intelligent emotion. Anyway, what good is having a big brain if it can't make us feel?

Sophisticates like to look down on Rodgers and Hammerstein productions for being schmaltzy and overwrought. They may have been that, but they were also moving. And what made them that way were Richard Rodgers' tunes.

Rodgers and Hammerstein's biggest box-office hit was The Sound of Music. It takes a guy who's awfully secure in his masculinity -- and intellect -- to admit he likes this movie. So I'm not admitting anything. But I will say that it has some beautiful tunes, and some other decent ones if you can get past the cloyingly cutesy lyrics. One of the most beautiful songs is the title song, which is almost as lovely as the movie's background scenery.

Oklahoma was another big hit for the duo. It, too, it seems hokey now, but the tunes are still great. One of its most beautiful songs was People Will Say We're in Love:

(To us Baby Boomers who grew up thinking of Shirley Jones as the mother in The Partridge Family, it's a revelation to see and hear her as a young woman.)

The King and I was another big hit, which made a star of Yul Brynner. Shall We Dance and Hello Young Lovers are classics. Here's Getting to Know You:

(Deborah Kerr was one of the screen's all time great beauties, though it is not apparent from this clip.)

Carousel probably had the best music of all the Rodgers and Hammerstein productions: June is Bustin' Out All Over, What's the Use of Wond'rin, A Real Nice Clambake, and You'll Never Walk Alone. Again, with all of these songs you have to get past the lyrics (blame those on Oscar Hammerstein and the year 1945). The most famous song was probably If I Loved You:

If by this point you're in the mood for an instrumental, the Carousel Waltz is also beautiful:

South Pacific was another big hit. Its most well known song may have been Some Enchanted Evening:

One song from that musical, I'm in Love with a Wonderful Guy, featured lyrics Hammerstein might as well have been writing about himself: "I'm as corny as Kansas in August, I'm as normal as blueberry pie. No more a smart little girl with no heart, I have found me a wonderful guy."

The wonderful guy Hammerstein found was Rodgers, who wrote tunes that could make even corny lyrics sound profound. But before Hammerstein, Rodgers had teamed with Lorenz Hart. Hart was a more sophisticated lyricist, and his lyrics tended to be strictly about love, a more timeless topic, so they seem less dated. The average American is not familiar with most of the Rodgers/Hart musicals, most of which were originally produced in the '20's and '30's. But they included some classic songs I hadn't even realized that Rodgers had written.

One was Isn't it Romantic. Here is the Rod Stewart version:

Another was Where or When. It has been recorded by artists as diverse as Ella Fitzgerald, the Queen of Scat; Dion and the Belmonts, an early doowop group; and Rod Stewart in his classics phase. Lena Horne's version:

Bewitched, Bothered and Bewildered is a song you associate with sophisticated, sultry temptresses. It has been recorded by practically every major siren of the past eighty years: Ella, Lena, Cher, Barbra, Carly, Celine -- and those are just the ones identifiable by their first names. Here's Ella's version:

The Lady is a Tramp is not the kind of song you'd associate in any way with a production like The Sound of Music, any more than you could imagine Frank Sinatra as Captain von Trapp. But it was yet another Rodgers song, and here is Sinatra's version:

(This song is not moving, but is included just to illustrate Rodgers' range.)

There are many others songs (Rodgers composed over 900 in his lifetime), but this post has meandered long enough already.

Looking at a list of the songs that Rodgers has composed is a little like reading a list of quotations from Shakespeare. All those common sayings you've heard so many times that you assume they're just part of the lexicon turn out to all be from one source. It's mind-boggling.

It may seem this post has given short shrift to the lyricists. But a good lyricist is basically just a clever wordsmith, a smart guy who works hard at his craft.

Being able to compose beautiful music, on the other hand, is a gift from the gods.

Very nice post John. I have been playing your selections to the family over dinner to universal approval. (We then moved on to Nat King Cole Xmas music.) And BTW we are all SOM/Julie Andrews fans.

You post also makes me very nostalgic for a time when popular music reflected a more confident and optimistic America. Bring back RR! ;)

"And BTW we are all SOM/Julie Andrews fans" --You're obviously much more secure in your masculinity/intellect than I am.

And btw, it's not my post that makes you feel nostalgic -- it's the music you're listening to. That's exactly the power of music, to affect your emotions.