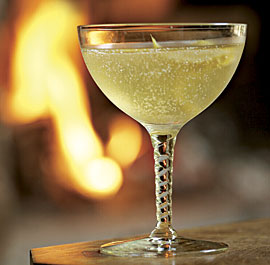 For some reason, probably because New Year's Eve was approaching, I thought of Auld Lang Syne the other day, and played it on Youtube. It's a nice piece of music, but it always sounds better on New Year's Eve.

The reason for that, of course, is because you're drunk. Drinking has that effect. Women seem more attractive, your acquaintances seem cleverer, and music sounds better. Plus you get more sentimental, which makes it the perfect occasion for a song like Auld Lang Syne.

Drinking does make the world a better place.

But if you've ever hung out with people who've gotten progressively drunker while you remained stone cold, you know what a sorry spectacle it is. Each cocktail seems to lower the drinker's IQ roughly seven points. (Make a rough guess of each person's starting point, do the math, and you'll see what I mean.) By the end of the evening you're hanging out people who are, for all practical purposes, retarded.

(When was the last time, while sober, you ran into a stumbling drunk and were wowed by his wit and intelligence?)

Dorothy Parker is credited as the originator of the line, "I'd rather have a bottle in front of me than a frontal lobotomy." It's a great line, and she did capture the essence of drinking perfectly: the former is simply a temporary version of the latter.

It's no coincidence that alcohol and alchemy start with the same three letters. Alcohol magically transforms the lame into the clever, the repellent into the attractive.

So go ahead and toss a few down this evening. The world may find you less delightful, but you will find it more so.

And that's really not such a bad trade.

Addendum, same day: Looking back on this a few hours later, I get the impression that what I was really trying to do was ruin your fun tonight. (There's really no joy equal to killing someone else's.) But don't worry: I'm sure I won't succeed.
Posted by John Craig at 12:04 PM

Before your son, or Hoff or Hjr., has a chance to say it: "Nice post John/Dad, I must remember to read the blog tonight - I might even find it entertaining." ;)
G

And I must remember to read your comments then too.