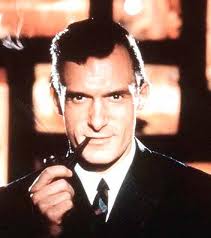 In the 1960's, Hugh Hefner was the envy of virtually every man in the country for his money, fame, and most of all, lifestyle.

In the 1970's, as the women's movement heated up, Playboy Magazine became a prime target. But the Playboy empire continued to flourish nonetheless. If Hefner, safely ensconced in his mansion in Los Angeles, was bothered by the flack, he didn't show any outward signs.

By the 1980's, both the Playboy Clubs and those curious ears-and-tails outfits the bunnies wore seemed a little antiquated. The Sexual Revolution had occurred two decades before and had long since stopped being news. And Hefner himself didn't seem to be on the radar screen that much. But his magazine continued to thrive.

In the 1990's, most of the Playboy Clubs closed, and in the second half of the decade the magazine started to feel the pressure of competition from the internet. But Hefner himself had lasted long enough to become an icon, celebrated not only for his business acumen but also for his championing of civil rights in the 50's and 60's (back when civil rights actually meant equal rights). An invitation to one of his parties at the Playboy mansion was still one of the hottest tickets in town. And Hef still presided over his empire with a benevolent grin, devoting as much personal attention as ever to the selection of the Playmates of the Month.

Bob Guccione, who owned rival Penthouse Magazine, never inspired the same sort of affection or admiration. There was always something a little darker about Guccione; he came across more like a sleazy pimp. The one movie he produced, Caligula, seemed to embody something about Guccione that people just couldn't warm up to. Hefner's role models were Sigmund Freud and Alfred Kinsey and Martin Luther King; Guccione's was Caligula. And Guccione never smiled. Every photograph showed him staring at the camera with that reptilian gaze, unblinking and seemingly unfeeling. The only message he ever seemed to convey was, "This is all mine." Hef, on the other hand, never completely lost that kid-in-a-candy-store aspect to his personality; he always seemed as if he couldn't quite believe his good fortune.

By the 2000's, even as the Playboy empire was cratering, Hefner's own status as an American icon remained undiminished. Celebrities still flocked to his house and declared him their hero. But there was a strong whiff of nostalgia to the way so many people seemed to feel affectionate towards Hefner. And by now something else had happened: Hefner had gotten awfully old.

This was apparent from that recent TV show The Girls Next Door. (Please don't try to tell me you never watched the show for at least a few minutes while channel surfing.) Those three gold diggers who looked -- and for the most part acted -- like Barbie dolls seemed wholesome enough (if you can swallow the concept of a wholesome gold digger). And they treated Hef with apparent affection. But it wasn't really the way women treat their boyfriends. It was more the way young women might treat their favorite grandfather -- you know, the rich one they're hoping will remember them in his will.

The one inescapable thought which had to have gone through the minds of everybody who saw the show was, what was the nature of their sex life? How often was he actually doing it with each of them? Did he actually go to bed with all three of them at the same time? How much Viagra did he have to use? It was hard to avoid the impression that Hefner looked just a little bit.....overmatched.

In October 2008 all three girls left the Playboy mansion. (Why all at the same time?)

Yesterday, it was announced that Hefner, 84, had gotten engaged to Crystal Harris, 24: 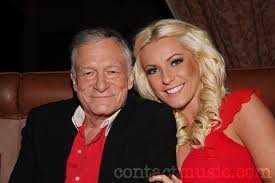 Harris reportedly cried when Hef popped the question. Was she crying because all her financial dreams had come true, or was she crying because she knew that was the appropriate response for the occasion? (People who can cry on command are usually sociopaths.) Yes, this blog does use the word "sociopath" a lot, but what kind of 24 year old woman marries a rich guy who looks like the Crypt Keeper?

Harris must feel the same way about Hefner that the 26 year old Anna Nicole Smith felt about 89-year-old oil tycoon J. Howard Marshall when she married him in 1994.

Still, what is Hefner's alternative? If you were 84 and had the opportunity to marry a 24 year old, would you turn it down so you could play Bingo with all the other geezers? Hefner now looks as if he belongs in an old age home; but if you had your choice of old age homes, wouldn't you pick the Playboy mansion?

Most women will probably react to this news of Hefner's engagement by expressing disgust of some sort. (In fact, since writing that line I have already heard one refer to him as a "disgusting creep.")

Most men will probably react a bit more indulgently: you gotta to hand it to him, even at 84 the ol' rascal is still up to his old ways.

I side with the guys.

Here's hoping Hefner gets Harris to sign an ironclad prenup, then in three years dumps her for a younger model.
Posted by John Craig at 4:00 PM

We should all be so lucky. Go Hef!

Anonymous --
I'm going to take a big leap of faith here and assume you're a guy.

I can't say he's my hero, because there's nothing really heroic about him. But he is definitely one of the guys I wouldn't have minded trading lives with.

From a female perspective: He's not a disgusting creep - she's a shallow bimbo (albeit now one with more money and better opportunities). OK, at least she's not stupid. I read that he proposed to her by putting the engagement ring in a music box depicting "The Little Mermaid". She was really moved because that's her favorite movie. If he trades her in for a younger woman in a few years, he may need a music box depicting Bambi.

How old does a guy have to be, btw, before having sex with a 24 year old is considered child molestation? It does sorta have that feel to it at this point.

Hugh Hefner was a psychopath who probably never had a close relationship with a woman. Yes, some women go for money. Without his money, he wouldn't have been able to get any. He didn't like women and he had no appreciation for the beautiful diversity of women in the real world.

Anon --
There's no question he got a lot more women than he would have had if he hadn't been rich and famous. But a psychopath? I don't see that. He wasn't a habitual liar, he didn't leave a long trail of former, embittered ex-friends, and he seemed to have good relationships with his children. There was a certain superficiality to his lifestyle, sure; but I don't see anything about him that rose to the level of sociopathy.