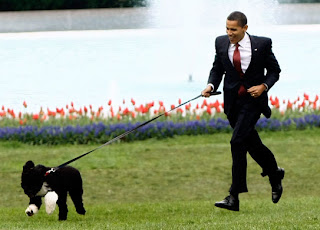 Back in September, in one of his always entertaining un-Teleprompted moments, President Obama said about his political opponents that "they talk about me like a dog":

Michael Vick, as we all know, has a history of cruelty to dogs. He tortured and even killed his if they didn't perform well in the fights he and his friends staged.

This didn't seem to bother Obama too much. Otherwise he would probably not have made that congratulatory phone call to Eagles owner Jeffrey Lurie for having hired Vick. That call seems even stranger in light of the fact that the Obama family pet, Bo, is a Portuguese water dog.

Obama does seem to have a thing about dogs, though.

I certainly wouldn't want to be the one to start a rumor that Obama is actually training Bo for a dogfight.

But he sure does seem to be running him hard.
Posted by John Craig at 10:24 AM

I always found it so sickeningly false the way Obama said he'd get his kids a dog if they got into the White House. Forgive me if I'm wrong but aren't American's who aren't the president allowed to keep dogs? With the Michael Vick case Obama certainly showed himself up for the animal lover he is not. I mean if he wants to congratulate someone on giving a prisoner a 2nd chance,why not someone who hasn't committed such a heinous crime? (esp in light of the knowledge that so many people who are cruel to animals go on to show a similar lack of respect for human life). As an English woman who thought Obama may well be a breath of fresh air for America, I feel he has proved a disappointing phony on every front.

Anonymous Englishwoman:
Thank you, you are so right. Obama is a sports fan and black nationalist first, everything else he says is just window dressing. And yes, the three signs that someone will turn out to be a sociopath are (a) fascination with fire, (b) cruelty to animals, and (c) bedwetting past the normal age. Vick has certainly shown the second, I don't know about the others. Obama's original campaign promises were about as heartfelt as Vick's current "contrition tour." Vick is saying what he has to to get by, Obama did the same: he posed as a moderately left of center, multiracial man who would have the most transparent administration in history, allow no more earmarks, etc, etc. Most recently he has expressed an interest in deficit reduction, but that's just another pose.

Having said that, I actually think Obama is a decent father, one area where it's not just a matter of photo ops. He seems to spend a fair amount of time with his daughters, which is usually the best measure of that.