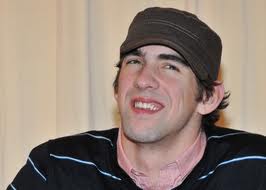 The Swim Across America website displays the following quote from Michael Phelps:

"You can't put a limit on anything. The more you dream, the farther you get."

This is the kind of pablum that athletes typically spout when they think that the main reason for their own success is superior character.

Nonsense like this actually does a disservice to the average youngster, because when that youngster falls short of his goals, he will feel all the more diminished.

The people most likely to listen to Phelps' advice are young swimmers. How likely is it that if only they dream more, they, too, will grow to be six feet three inches with a wingspan of six feet seven inches and a freakishly long torso, and have size fourteen feet, abnormally flexible ankles, loose muscles, large hands, and a high testosterone level?

Yep. A little more dreaming, that's all it takes.

This is not to disparage Phelps' work ethic: he worked extremely hard at swimming up until 2008. But there are plenty of other swimmers who worked equally hard, but had nowhere near the same success.

Phelps is young, and he probably figures that's the sort of thing he's expected to say to encourage young kids. To some extent, he's right. But there must be a way to encourage them that doesn't make you sound like Joel Osteen.
Posted by John Craig at 8:41 PM

Shouldn't that be "further"?
G
PS Lochte's Dubai swims will have impressed even MP.

Guy --
From Google: "further: to or at a greater extent or degree or a more advanced stage (`further' is used more often than `farther' in this abstract sense)"

And yes, even if Phelps trains hard from here to London, he's got his work cut out for him if he wants to beat Lochte.

So true John our abilities are set by our genes and there's not much that we can do about that. Dedication and hard work will count for nothing after will each reach our genetic limit.On the other hand, if heartiste is to be believed best frame of mind for accomplishment seems to be overconfidence rather than realistic awareness of our own limitations.

Rona --
Thank you…..what Heartiste is talking about is a different type of performance, one which most of us have the ability to deliver, but in which the vast majority of men are limited by their confidence. With picking up girls, it's all about the mental game, and most guys have the brainpower to do that.

PHelps is talking about overcoming your physical limitations, which is, after a point, impossible.